Does she mean it ? Probably but that does not mean anything useful will be done.
Two thirds of British Muslims would not report a plot to police.

The same poll revealed that over half of all British Muslims think homosexuality, the very act of gay sex, should be illegal in Britain. Another 23% want to tear down British common law and replace it with Islamic Sharia. Moreover, 39% believe that wives should always, without exception, obey the commands of their husbands; 31% of Muslim also believed that men (not women of course) should be legally permitted to practice polygamy and marry more than one wife.

‘Is it right to kill someone who insults the prophet?’

“Yes,” said the bearded man with the animated personality. “Because when you, every day you face frustration. And you know, every day you have, uh, you’re mad, or somebody says that, and you feel hate your soul. You could do anything you wanted. If you committed suicide, you don’t care, because your heart, your heart is telling you, ‘I don’t want to live no more,’ because you couldn’t take that much hate. Or you, you kill someone.”

The Center for Security Policy released a poll Tuesday that should give all Americans pause. The results show that a startling number of American Muslims, our fellow citizens, agree that violence is a legitimate response to those who insult Islam. A full majority of 51% “agreed that “Muslims in America should have the choice of being governed according to shariah.”

According to the just-released survey of Muslims, a majority (51%) agreed that “Muslims in America should have the choice of being governed according to shariah.” When that question was put to the broader U.S. population, the overwhelming majority held that shariah should not displace the U.S. Constitution (86% to 2%). …

Even more troubling, is the fact that nearly a quarter of the Muslims polled believed that, “It is legitimate to use violence to punish those who give offense to Islam by, for example, portraying the prophet Mohammed.”

A full 25% of those polled agreed that “violence against Americans here in the United States can be justified as part of the global jihad.”

What do we do with this ?

Spengler (David Goldman) has some suggestions.

Sherman and Sheridan suppressed sniping at Union soldiers by Confederate civilians by burning the towns (just the towns, not the townsfolk) that sheltered them. In other words, they forced collective responsibility upon a hostile population, a doctrine that in peacetime is entirely repugnant, but that in wartime becomes unavoidable.

I have read a lot about Sherman and his way of dealing with a hostile population was hang snipers and burn the villages that supported them.

Collective punishment has gotten a bad reputation from the Germans in World War I and World War II. They would round up innocent civilians and execute them to punish guerilla attacks in the area. I am not advocating anything like that.

Israel demolishes the homes of terrorists.

“The police are going deeply into the Arab neighborhoods [in Jerusalem], which has not been done in the past,” he said. “We will demolish terrorists’ homes. We are allowing our forces to take strong action against those who throw rocks and firebombs. This is necessary in order to safeguard the security of Israeli citizens on the roads and everywhere.”

Palestinians may consider children expendable but houses are more precious. How would we implement such a policy ?

Many mosques have been used to store weapons and plan attacks.

This is certainly the case in Israel.

The 38-page report includes photographic evidence of weapons being stored under pulpits and elsewhere in mosques during December and January’s Operation Cast Lead in Gaza. It notes that Israeli troops fighting Hizballah in Lebanon, U.S. troops fighting terrorists in Iraq and even Palestinian Authority officials in the West Bank have encountered similar practices.

How about in the US ? Mosques have been shown to teach violent extremism.

The mosques in the US are largely funded by the Saudis which promote the Wahhabi extreme version of Islam.

Firm figures are elusive, but estimates are that the Saudis fund up to 80% of American mosques, at least in part. And their goal is the same here as it is elsewhere in the world where Islam must compete with other religions: to prevent Muslims from integrating into the host society.

If a terrorist is shown to have attended a mosque, that mosque should be closed.

The terrorists are also winning a psychological war in Europe. They identify police informants and force them to become suicide bombers. That is why so many are “Known Wolves.”

These attacks, in other words, are designed to impress the Muslim public as much as they are intended to horrify the western public. In so many words, the terrorists tell Muslims that western police agencies cannot protect them. If they cooperate with the police they will be found out and punished. The West fears the power of Islam: it evinces such fear by praising Islam as a religion of peace, by squelching dissent in the name of fighting supposed Islamophobia, and by offering concessions and apologies to Muslims.

Demolishing or closing some homes and a few mosques might signal more resolution than speeches by politicians. Deporting a few families would also be salutary.

Please forward [this] to people in Lakewood [New Jersey]. I gave [Rabbi] Yeruchum Olshin [May he live for many good days, Amen], [a] ride this morning and [he] said [that] I [may quote him – that is, Rabbi Olshin] in his name to vote for [candidate] Trump because [the authoritative commentary on Jewish law and practice explains] [King] David [had] 2 [failings] and [David] didn’t lose [his] kingdom, but [King] Saul [had] only one [failing] and lost [his] kingdom. Why? [The] answer is [because] David’s [failures] were in his private life but Saul[’s] [failure] was in [relation to] the [kingship] … [albeit it is all distinguishable] [Rabbi Olshin] said Trump is [low] … in his private life but Hillary [is] corrupt in public office. [quoting Rabbi Aaron of blessed memory]… Forward to everybody!! 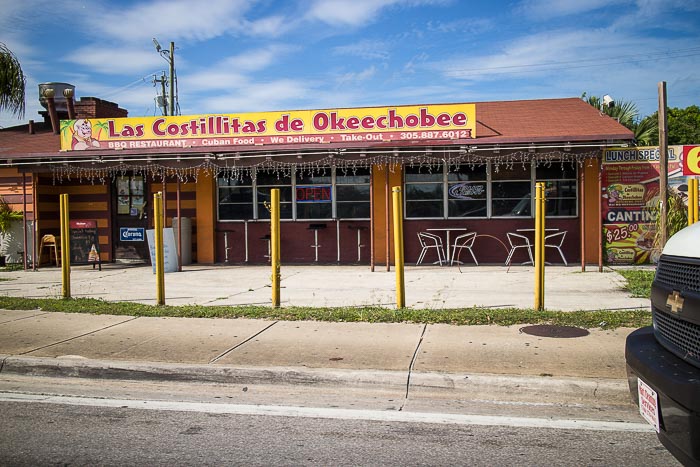 Chicagoboyz have not eaten at Las Costillitas de Okeechobee on scenic Okeechobee Road in Hialeah, FL.