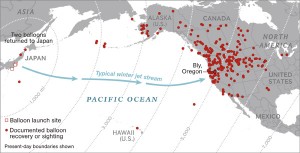 This is a National Geographic map of all the documented impacts of Japanese Fusgen Bakudan, or “Fu-Go” balloon bombs during the Japanese November 1944 – April 1945 strategic bombing campaign. The “Fu-Go” balloons took advantage of the trans-pacifc upper atmosphere jet stream that Japanese weather balloons had discovered shortly before Pearl Harbor. This same jet stream that delivered “Fu-Go” balloon bombs also heavily disrupted attempts at precision bombing from USAAF B-29’s that were based in the Marianas in the winter of 1944-45..