As a “solution” to our economic problems, the government has been spending money on stimulus programs. Since the government can’t directly incent business development, this type of money ends up going to 1) minor infrastructure projects and 2) funds for local governments and states to spend on salaries, programs.

As we know, the government has to raise revenues to pay for these programs in the form of taxes. Then the taxes, which distort business activities in myriad ways, are paid out in the form of salaries and grants in a relatively inefficient manner through a variety of poorly managed government programs.

While it isn’t popularly known, the US has among the highest corporate tax rates in the developed world and it isn’t just a co-incidence that other venues such as Hong Kong and Brazil are seeing an upsurge in IPOs and stock listings. The US today is not a competitive place to start a business, all else being equal.

The current government is not only taxing the US at an unsustainable rate as far as competitiveness, it is spending money that it doesn’t have (deficit spending), which will burden the US and future generations with high interest payments. The current deficit for 2009 is estimated to be about $1.6 trillion dollars, which will add about $100 billion / year in interest payments (fluctuates depending on rates).

All of these taxes don’t help put people in meaningful (non-government) jobs. In fact, they hurt our competitiveness and hurt the businesses most likely to grow and create jobs. Since unemployment is important even to our elected officials (unlike debt, competitiveness and future interest burdens, apparently) because an unemployed electorate is an angry electorate, institutions like the NY Times have to start thinking about tax cuts as a way to spur job creation.

From the article, titled “Tax Cuts Might Accomplish What Spending Hasn’t“,

When devising its fiscal package, the administration relied on conventional ideas based in part on ideas of John Maynard Keynes. Keynesian theory says that government spending is more potent than tax policy for jump-starting a stalled economy. (Per the administration) it says that an extra dollar of government spending raises GDP by $1.57, while a dollar of tax cuts raises GDP by only 99 cents.

According to the Romers (on the President’s Council of Economic Advisors), each dollar of tax cuts has historically raised GDP by about $3 – three times the figure used in the administrations’ report. That is also far greater than most estimates of the effects of government spending.

While pretty much anyone reading this blog could have told you that tax cuts would have been a more effective way to stimulate the economy, it is striking that even the administration’s own advisers are waking up to this obvious fact. 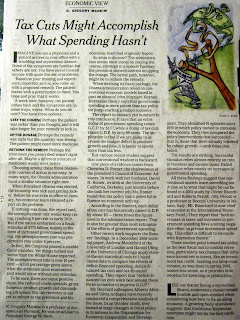 Too little, too late, for everyone that will be paying for this mess in the future and unwinding the piles of ineffective government staff and programs that these dollars create, but still a glimmer of insight for that crew, at least.