In Chicago we don’t have In-N-Out Burger franchises. Thus recently when I was in Arizona I saw a big sign for one and then when I was returning back from the airport I got off the highway and drove around until we located the franchise (which turned out to be right by an exit, but I had already passed it, so next time it would be done in a flash).

I generally didn’t know much about the franchise except that 1) the menu was very simple 2) the place was always packed. We got there a bit after 11 in the morning so the lunch hour rush hadn’t started yet. By the time we were done eating, the line was starting to get very long. 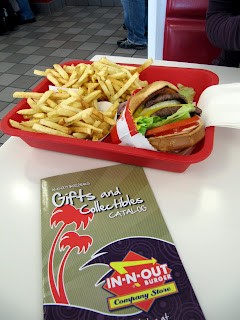 The food was great. To some extent they turn the “fast food” label on its head – the food is cooked while you wait and seemed very fresh. People have expectations of long lines, waiting for their food, and they are OK with it taking longer. There is obviously a trade-off here when compared against the other fast food chains, since I wouldn’t stand in a long line and wait to eat the typical fare. This is the “double double” with fries, and they had a nice catalog because apparently a lot of people like to show their In-N-Out pride by wearing shirts and picking up other paraphernalia. 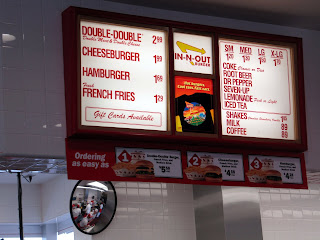 The menu at In-N-Out is very simple – burgers, fries, and shakes. In reading up (researching?) for this post on wikipedia I found that there was a “secret” menu, which mostly is a variation on items above, although there did seem to be some entirely different items (like a grilled cheese sandwich or fried onions). 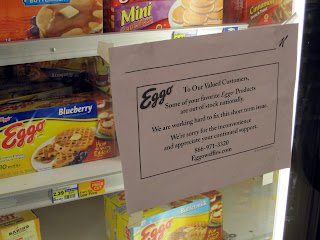 Having a simple menu and focused presentation allows the company to focus on the quality of their hamburgers and fries rather than myriad other menu items. To contrast it with a McDonalds, they have chicken, whatever a McRib is made out of, breakfast food, etc… which must make up a much larger logistical challenge than those faced by In-N-Out.

As you can see from the photo above I noted the “worst” form of logistical failure, being flat-out of a product that consumers expect to see. It is odd to me that Eggos had a supply chain breakdown of this magnitude but it wasn’t just at my local grocery store – they even mentioned it on their web site and formally apologized for this occurrence.

Another element that makes In-N-Out burger unique is that they don’t franchise. Virtually every other large chain offers franchises, and then attempts to control the behavior of franchises through rules, supply chains, and various other measures. While this has limited the expansion of the chain, it must be a significant contributor to the success of the individual stores within the chain.

Hope to get one in Illinois one of these days, but that is a lot of states away from California (they are expanding into nearby states including Nevada, Arizona and Utah).

11 thoughts on “In-N-Out Burger and Logistics”