As someone who’s written several times (here and here) about the course of modern health care (its inherent complexity and cost), I’ve been watching the latest moves in US health care funding with a great deal of interest.

From the introduction of antibiotics to the breakthroughs in transplant surgery, medicine in the 20th century was in a position to provide dramatic improvements in health care (both quality of life and length of life) at relatively modest cost. Many consider it a golden age in medicine. My personal belief is that medical care is about to hit another burst of creativity and success (but at much higher cost-to-benefit) as non-invasive imaging, micro-surgery, diagnostic testing, and DNA-propelled pharmaceutical customizations kick in. I may be wrong, but I think my beliefs are a reasonable extrapolation of the trends in medical care since the end of the 1970s “silver bullet” period of medicine.

So what do my guesses about modern medicine mean in a new era of greater tax subsidies for US health care? An era which, by necessity, must politicize health care further. It got me to thinking about the hidden subsidies during earlier periods of American history, powered by the domestic political systems of the time, and driven by citizen/voter appetites. And it got me thinking about the law of unintended consequences.

After a few minutes scribbling on the back of an envelope, I came up with the following: 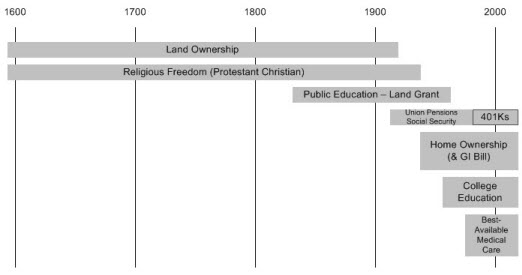 I’m hardly an historian nor an expert but l think the diagram above identifies at least some powerful appetites in American society that were supported and encouraged by political powers at the time. Appetite begat political response. Politics generated subsidies. Subsidies generated yet more appetite. A first American subsidy, even before political freedom, was obviously economic opportunity … which in a pre-industrial society translates into land ownership. Away from European cities and epidemics, early Americans had few limits on their ability to clear and thereby own the land which they settled. Force of arms would remove the land from Native American or Spanish/French control. High reproductive rates and greater life expectancy created a dramatic increase in the number of Americans who also desired their own property. The laws in place, and the decisions of authorities, supported the development of squatting and land purchase which built up its own momentum in the 18th and 19th centuries … defying both British imperial preference (to keep the colonies east of the Appalachians) and the hostility of Native Americans to the methodical conversion of their land from hunting/gathering/subsistence agriculture, to the newly vibrant agricultural practices of the English-speaking world. Every phase of economic development … agricultural equipment and railways … drove further expansion of land development. As late as World War 2, land clearing for agriculture was still underway up North. 350 years.

In partnership with the desire for land was the desire to escape the religious conflicts of the European continent. For Protestant Christians, members of a constantly shifting kaleidoscope of sects and denominations, the development of laws and political traditions that would provide them with freedom of worship were important … and sustained a suspicion of clerical central authority that lasted well into the 20th century. Laws and political traditions responded accordingly. The concept of religious exemptions encouraged churches to acquire their own economic assets.

As part of that religious tradition, dating back at least to the late 16th century, literacy and education were encouraged and seen as an important part of full participation in both religion and society. As time went by, public funds took over from religious organizations in the sponsorship and maintenance of primary and secondary education. Schools were important, and worthy of parental supervision and participation whether on the frontier or in the city. The provision of schooling was therefore a significant political concern as well. The “Land Grant” educational Acts of the late 19th century were a major commitment of funds to the parts of America that were still being settled. The development of these educational institutions was to carry the western part of the country through the transition from predominantly agriculture and resource-extraction, to industrialization and the modern service economy.

As industrialization took hold, and the farms were emptied in the early 20th century … the “hired hands” who once aspired to land ownership were now workers in factories, mines, and urban industries. A new demand for safety and collective bargaining for wages was matched by a burst of laws and regulations governing the formation of unions and the status of labor. The idea of a pension income after a lifetime of service to a company became commonplace. Social Security in the 1930s reflected a new concern that some regions of the country, and some families, were simply unable to provide sustenance for the very elderly. The definitions of “sustenance” and “elderly” were to broaden in following decades. In latter days, we’ve seen a further subsidy of financial arrangements as individuals have become responsible for their own pension schemes (401Ks) and a constellation of laws have made retail investing (and the associated services) a going concern.

Soon after 20th century unionization had changed the terms of work, the workplace, and “retirement,” a new benefit was encouraged by law, tradition, and government … reflecting the aspirations of a newly prosperous and newly urbanized population … home ownership. And thus for many years, the tax regulations, laws, and financial instruments of the United States have leaned heavily toward subsidizing home ownership. Sometimes those subsidies have been generous to the point of silliness (the so-called NINJA loans).

In the post-war era, a college or vocational education changed from being a rare opportunity to an expectation, almost a right. Through direct and indirect subsidies, governments encouraged the expansion of post-secondary education. Educational institutions became non-profit engines of growth … fueled by industrial and government subsidies, and tuition that outpaced inflation. Educational quality now became a distinguishing feature in pricing. The assumption of personal debt in the pursuit of a college or university degree was widely considered reasonable. Certainly the income of college graduates seems to have held up far better in the latter half of the 20th century than that of agricultural and industrial workers.

And finally, health care … and the introduction of Medicare and Medicaid in the mid-Sixties, which first subsidized health care for citizens during what I’ve proposed was a unique “golden age” of medicine. These programs have since grown like Topsy, to the point that they are woefully underfunded. As we know from the heated discussions surrounding the latest debates on tax-supported health care, the hidden penalties placed on the public health care system to provide emergency room care to all comers, and Medicare treatment at less than cost, has led to the disappearance of many non-profit health care organizations. Someone has to pay. Non-profit can’t be “negative-profit” for long. Either the taxpayer, or the health care plan purchaser, or the company health care plan (and therefore corporate customer) has to pony up. Of course, we’ve seen there’s another option: … make the next couple of generations of citizens pay for current consumption.

Reflecting on four centuries of political subsidies in America, it seems to me that sustainability only comes if the populace is willing to drop some subsidies in order to gain new ones. Land ownership (forty acres, and a mule) gave way to salary work. Not without resistance, mind you. Religious freedom gave way to religious indifference and the dwindling of denominational political power. The union pension (and associated “Cadillac” health care plans) are now limited to government employees and the aging members of dying industries.

Unfortunately, as the diagram above indicates, that still leaves the US with a very full plate of political subsidies to squeeze out of the electorate, and the electorate’s kids and grand-kids.

To make a long story short, then,

* if medical care is about to get more and more expensive (because there’s just more of it), and
* if good medical care and great medical care are more easily distinguished, courtesy of the Internet

Price-pressure on the very best care will be relentless. How many politically subsidized aspirations can the nation support then? How much room is there on that American subsidy plate?

All have been subsidized by past US prosperity, leading to unsustainable “bubble” demand and pricing in the last forty years. Retirements that start too soon and last too long. Home ownership (why not a cottage as well!) far beyond physical need. College education inflated in cost and reputation by self-perpetuating bureaucracies rather than employment requirements. Unfunded liabilities for the medical care of millions of poor Americans, run as a giant Ponzi scheme with the hope that kicking the can down the road will solve the problem on someone else’s watch. Expectations have been established. But which of these cultural expectations and political subsidies will fall away first? In the words of the wise-ass market pundits, “you can make it hop but you can’t make it fly!” You can run up the credit card to pay for the subsidies but eventually the bill comes due.

Having just added a massive set of subsidies in the domestic economy for a service (medical care) that is enhanced by basic scientific and industrial research (and by the inherent frailty of the human form!), I think America has placed its chips on the next big “bubble” … maybe the last big bubble … in human appetite. As one Internet commentator noted … do you really have something better to spend you money on than your health? Not something more preferable but something better. What dream will you give up in order to add a new one to the American subsidy story?

Just as our parents and grand-parents no longer expected to have their own farm, and we gave up trading 35 years of our life for a union pension, we’re going to have to start talking to our kids about what we’re going to give up to get this new health care dream, as and when and how we need it. For everyone in the American boat, legal or not. With the vision of “best possible care” all too visible before us, like foreign vacations, McMansions, and Harvard degrees.