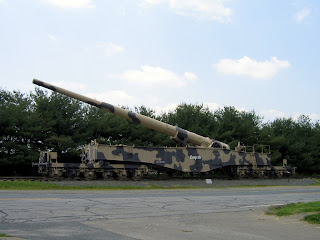 Dan and I went on a trip to Aberdeen Proving Grounds, the US military museum in Maryland, back in 2005.  While going through old photos I saw this one of “Anzio Annie”, one of the 2 surviving German WW2 railway guns.  The gun was named “Leopold” (which you can see in white paint on the side in the famous font everyone who grew up building WW2 plastic models remembers) and per the wikipedia page the US re-assembled this gun from parts of two damaged guns found on railway tracks in Italy after the fall of Rome.  These guns were the equivalent of the 11″ naval guns used on the German battleships Scharnhorst, and discussed here as part of my post on the Norwegian coastal artillery.

Since the gun was on a railroad track it could apparently only be brought out at night or during poor weather else it would be subject to Allied air attack.  After the landing in Anzio in early 1944 this gun, along with other German heavy artillery, repeatedly struck the Allied beachhead.  I was looking for documents on the effectiveness of this weapon when I found this article online.

By 2 February the Germans had brought down from the north several railroad guns to counter the naval gunfire that Salerno had led them to expect. The largest was the 280-mm. rifle, nicknamed Anzio Annie or the Anzio Express by the Allied troops. With a barrel 65 feet long, Anzio Annie was drawn by a diesel-electric locomotive and accompanied by four cars, one of which bore a turntable on which the gun was mounted to obtain traverse when firing. Another was an air-conditioned car for carrying powder. On 7 February the Germans used 280-mm. guns to shell Allied ships off Anzio and Nettuno. After that date the weather began to clear and the monsters were so vulnerable to air attack that they could probably be used only sporadically if at all. They may have been sent back up the coast as protection against the threat of an Allied amphibious assault at Civitavecchia, which the Germans continued to expect. Two 280-mm. guns were discovered on a railroad siding at Civitavecchia after the fall of Rome. Their names were Leopold and Robert. Leopold was shipped to Aberdeen Proving Ground, where careful study of several unorthodox design features led to the development of the postwar U.S. 280-mm. “atomic gun.”