Recently Dan and I both started trying to read less military history because the books tend to be depressing. Knowing that I was going to be stuck on an airplane for a few hours and needing some light “by the poolside” reading I picked up A Colossal Failure of Common Sense: The Inside Story of the Collapse of Lehman Brothers

by McDonald (yes I do realize that this sounds strange to most folks). 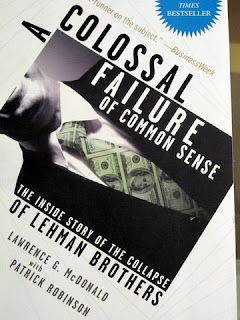 A bit of background; Lehman Brothers is a famous financial firm that failed during the 2008 crisis and became the biggest bankruptcy case in US history, since it had a balance sheet of over $600 Billion in listed assets at the time of its collapse. Here is a wikipedia summary of the bankruptcy proceedings. Note that at the time of its bankruptcy Lehman had a 33-1 asset leverage ratio, meaning that only a small decline in asset values wiped out the equity and made the firm insolvent. The US Government declined to rescue Lehman Brothers, which remains controversial to this day, and the fall of Lehman also caused an immediate crisis at AIG which led to a huge US government backstop of $85B to halt further failures of other investment institutions.

While the book is interesting, the author, who is a trader, misses most of the essential elements of WHY Lehman was doomed to collapse, focusing on the remoteness of the CEO Fuld, the exposure to toxic real estate mortgages that couldn’t be “packaged” into assets and sold (because the securitization market had collapsed), and Lehman’s purchase of real estate at the “high water” time of 2007 (virtually everything bought in 2007 turned out to be a bad idea, look at your portfolio at the time).

Note that I think that the book is very interesting and entertaining and recommend that readers buy it. These are more “conceptual” than “literary” or typical journalism reviewer type concerns.

However, these items are merely symptoms of the root cause. The author inadvertently stumbled upon the root cause while discussing the history of Lehman and Fuld’s rise to power, when disputes among the partners led to partners leaving the firm, taking significant amounts of their capital with them (the firm had to utilize their cash to buy back their stock).

When Lehman was spun back out as a public entity, in 1994, essentially the partners no longer mattered, regardless of their title, because Lehman was a public company and the board was “captured” by Dick Fuld. The board was admirably satirized in the book:

Nine members of the ten-person board were retired. Four of them were 75 years of age or older… only two of them had direct experience in the financial services industry – and they were all from a different era.

From this disparate group of old stagers, Lehman created a risk committee, chosen and controlled by Fuld himself. It met only a couple of times a year, which is an unusual way to monitor the company’s ongoing risk.

In addition to “capturing” the board and stuffing it with out-of-touch retirees, and nullifying its risk management capabilities, Fuld did what many CEOs do, installed a #2 who was in no position to challenge him to ever run the company.

A key factor in the appointment was that his ambitions did not apparently include becoming CEO. His great concern was with what he called the “culture” of Lehman Brothers.

Packing the board with retired and out-of-touch geezers, ensuring that no one competent is in place to succeed you, and limiting opportunities for your already-supine board to govern your actions are often immediate actions of CEOs that want to ensure their reign will be long and profitable (for themselves).

PUBLIC COMPANY “RACE TO THE BOTTOM”

The other myth in the book is that Lehman took extra-ordinary risks that wouldn’t have been made if someone else (other than Fuld) would have been at the helm, or if Fuld would have listened to any of the competent staff at Lehman (of which there were many, according to the author).

But in reality Fuld was just doing what all his competitors were doing:

– gorging on asset backed securities and earning easy profits (as long as the carousel kept moving)
– investing in hedge funds which were the latest craze
– directly purchasing real estate which only seemed to go up higher and higher
– leveraging up to insane proportions (at 33-1, they were typical)
– earning money from derivatives with counterparty risks (with counterparties such as AIG, Bear Stearns, etc…)

These same tactics (or close variants) were done by Citigroup, Merrill Lynch, Bear Stearns, Bank of America, and others. Goldman Sachs tried to get out a bit early but were singed and JP Morgan Chase under Jamie Dimon also were (relatively) well run shops by comparison.

If Fuld wouldn’t have done these things his stock would have been hammered and likely the board would have been forced to intervene and replace him with someone who WOULD move along with the herd. Thus Fuld really only could try to ride the tiger or get off and let someone else ride the tiger. From his perspective, and given that there seemed to be limited risk on the downside (unless the firm failed catastrophically, in which case he as CEO plus the CFO could be on the hook under Sarbanes for jail time if fraud was proven), he obviously chose to ride the tiger.

Another type of “myth” is that if someone had explained the risk involved with the real-estate asset-backed securities to Fuld, then he would have pulled back the risk and saved the firm. This is analogous to the role of Sherron Watkins at Enron who told Lay about their accounting.

The book describes how Michael Gelband, who was the head of fixed income and by all accounts a seasoned veteran of Wall Street, tried to make the board and Fuld understand the risks that they were facing. Per the book:

The trouble was, Dick Fuld could not understand the technicalities of market finance at the highest level… the Chairman didn’t get it. But he realized he needed clarification. In front of Mike, he called Henry Paulson, the secretary of the United States Treasury and a former CEO of Goldman Sachs. Dick did not even try to get into the details of the problem, and handed the phone to Mike, who pointed out with immense clarity the serious problems recently developing in the asset-backed commercial paper market and its deadly potential impact on the giant leveraged SIVs, to which Wall Street and the largest commercial banks were exposed…. to this day, Henry Paulson, with a supreme grasp of the subject, insists that the first person ever to warn him of the coming catastrophe was Mike Gelband, of Lehman Brothers, in that phone call from Dick’s office.

And what was the response? Fuld basically told him to get with the program of higher leverage and bigger deals and ignore the risk so Gelband quit the firm.

While I do not want to compare Watkins, who was a relatively minor official, to Gelband, who is a big hitter on Wall Street and has gone on to other large roles, conceptually the hole in the logic is that even if Fuld (and Lay) understood the risks, they had no choice but to keep “riding the tiger” because that was how they made their money.

The book cited all the money that Lehman was making on CDOs – and as those traders earned more money they became even more important to Lehman. In real life they chose to resolve the conflict by “shooting the messenger” even if the messenger had been able to convince Paulson.