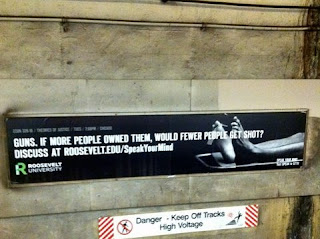 Recently I saw this ad at a Chicago train subway line and of course the answer is… yes. Unfortunately Illinois governor Quinn, who barely won the Democratic primary and barely won the general election, views his mandate as unstoppable and refuses to recognize this reality.

In this article from the Chicago Tribune, Quinn says he will oppose concealed carry, making Illinois 1 of only 2 states that have no form of this in the United States.

“The concept of concealed, loaded hand guns in the possession of private citizens does not enhance public safety, on the contrary it increases danger for everyday people as they go about their lives,” Quinn said.

It is immensely frustrating that a governor whose largest city leads in the nation in absolute number of murders (even though we are third in population) can’t see that strict gun laws do nothing to deter criminals.

The state of Indiana, right next door to Chicago, in fact part of the metropolitan area, has a very flexible concealed carry law and they don’t see that public safety is diminished.

It is hopeful that the downstate Democrats that support responsible firearms laws (by responsible meaning allowing responsible citizens to have firearms, rather than just criminals) will join with Republicans in passing this law. Quinn has proved to be a doctrinaire “classic” liberal Democrat, banning death row (I guess he would have rather had Gacy live out his life on the public’s dime the same way Speck did), raising taxes 67% and siding with unions at every turn. Literally I cannot think of a single thing that Quinn has done that hasn’t been straight out of the most liberal playbook, even though Illinois is a moderate state.