When I was in Norway at the tiny (and picturesque) town of Mundal, I noted what appeared to be an abandoned highway toll booth near the edge of town. Since the meticulous Norwegians would never leave behind something like this without good reason, I started looking more closely at this find. 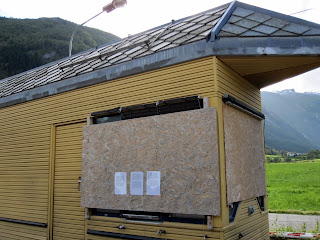 Surely enough, the meticulous Norwegians had a sign on the booth (in English, no less) describing why this toll booth was historic in their eyes. 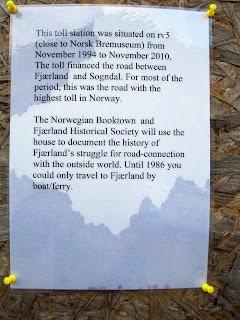 This toll station was situated on rv5 (close to Nork Bremuseum) from November 1994 to November 2010. The toll financed the road between Fjaerland and Sogndal. For most of the period, this was the road with the highest toll in Norway. The Norwegian Booktown and Fjaerland’s Historical Society will use the house to document the history of Fjaerland’s struggle for road-connection with the outside world. Until 1986 you could only travel to Fjaerland by boat / ferry.

As they noted on the sign the toll was very expensive. From what I have been able to find the toll cost 180 kroner each way (approximately $20 USD) but cut a substantial amount of time out of the drive to Mundal. However, once the road was paid for, the Norwegians dismantled this toll booth and stopped charging drivers, which is why they now have plans to use it as part of the historical site.

On the other hand, you have the State of Illinois, whose toll authority plans to dramatically increase tolls starting January 1, 2012. Per this article – Illinois toll road increase:

The cost of a trip on the Tollway system for the average I-Pass driver would increase to $1.18, up from today’s average of 63 cents per trip

Note that for non-iPass (electronic tolling) drivers, the increase is effectively doubled; welcome to Illinois, tourists or those too poor or disorganized to afford an iPass (you need to replenish by credit card). This is one of the most regressive of all taxes.

The key concept of the Norwegian toll road system was:
– build something that hadn’t existed previously that was worthwhile
– when it was paid off, dismantle the toll booth and eliminate the tolls

This concept doesn’t apply in Illinois, where drivers have paid off the previous toll roads long ago but they not only continue to collect tolls, they INCREASE the tolls ON THOSE SAME ROADS to finance their continued existence as an organization.

“We are confident that the vast majority of customers and communities we serve stand behind us in support of this 15-year investment in the Illinois Tollway’s future,” said Illinois Tollway Executive Director Kristi Lafleur in a news release. “Now is the time to move forward with these critical infrastructure improvements to provide congestion relief on the Tollway and coordination with the other transportation and transit agencies to do something new and innovative with an eye to the region’s future transportation needs.”

Really? Was there a referendum, or chance for toll payers to vote on these changes? Of course not – there were some public meetings, but no formal mechanism that allowed toll users to express their displeasure with this toll increase.

As far as “new and innovative” items, there is nothing here that qualifies in that realm. The tollway doesn’t even reach into Chicago, so none of the problems of desperate traffic conditions within the city would be addressed by this $12.1 capital program. Here are the “innovative” (their words) items:

Projects slated for completion under the capital plan include:

Thus basically you are paying AGAIN to keep these highways running in Illinois, that you already paid for, plus a big taxpayer funded bureaucracy to boot. Once a tollway, always a tollway, and now we need to pay a bunch of politically connected contractors to rebuild it AGAIN.

Here are the signs behind the Norway booth. Wouldn’t it be great if instead of being Norwegian destinations, they were names we’d recognize in Illinois? But it isn’t going to happen – not only will they never take them down, they will RAISE the tolls to make you pay for it AGAIN (and give themselves a raise, for certain, to boot). 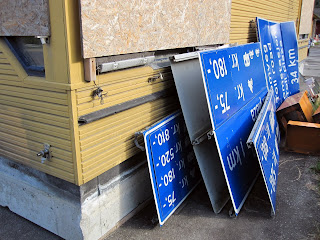 11 thoughts on “What Norway Can Teach Illinois About Toll Roads”