The band LCD Soundsystem, led by James Murphy, recently broke up. They are releasing a DVD of their final live shows along with a release in theaters FOR ONE DAY ONLY ON Wednesday, July 18. Look for “Shut Up and Play the Hits” near you and I recommend going. Here is a web site with the trailer and a list of theaters.

I saw LCD Soundsystem three times – they are (were?) one of my favorite bands. The first time was at Lollapalooza in 2007 – they played right before the headliner, who was Daft Punk (in their amazing triangle light show) and after LCD’s set was done James Murphy just pointed over to the Daft Punk stage and said go. “Daft Punk Is Playing At My House” (celebrating the release of their album with a big party) was one of LCD Soundsystem’s big hits off their first record, so it was a great coincidence that they were playing back to back on nearby stages. I remember how hard their drummer worked the entire show and that he was up front (often drummers are in the back) – I thought he might pass out in the heat. 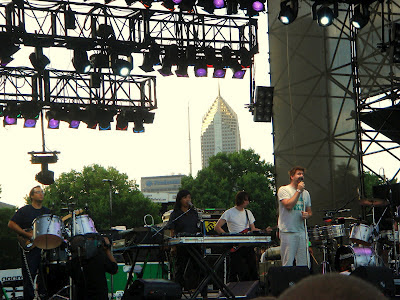 The second time I saw LCD Soundsystem was at Pitchfork in Union Park in Chicago in 2010. It was a blazing hot day and I just came out to see LCD Soundsystem at the end. They played a great set and I walked back to River North along Grand Avenue. At one point a CTA bus slowed down and asked me if I needed a ride, which is code for “you are in the wrong neighborhood” because CTA buses don’t generally slow down for anything except assigned stops, so I got a cab after that. 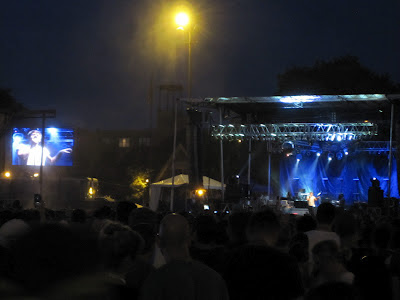 The third time I saw LCD Soundsystem was at the Aragon Ballroom in late 2010. It was a great show with a happy vibe and the entire crowd was surging. Their last song before their encore was “Yeah” and they built it up instrument by instrument and then each musician walked off the stage one at a time until you just had feedback. It seems strange that a song like “Yeah” could be so good live but maybe you just had to be there. My photos didn’t turn out (I was too paranoid that they’d confiscate everything to bring my good camera, which was a mistake) but at least I have the memories.

I recommend that you go and see the movie, and if you can’t, pick up the DVD (even though I haven’t seen it, I know the songs). And good for LCD Soundsystem to try to go out with a bang.

If you are interested in checking out LCD Soundsystem here are a few songs you can download over at iTunes if you want to spend $1.29 / song