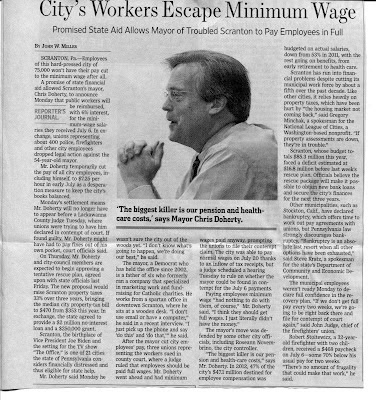 Recently the city of Scranton, Pennsylvania (yes, home of the fictional “Office”) was forced to pay employees $7.25 per hour (minimum wage)

As a desperation measure to keep the city’s books balanced

Employees were furious and took the mayor to court, until a “rescue”
plan was put into place where the state gave a one time $250,000 grant and a $2M state loan, enabling the city to pay back the short paycheck. The plan raises Scranton property taxes by 33% over three years.

It is interesting that any sort of pay delay merits a large article in a major news media source (the WSJ), and yet paying SUPPLIERS late isn’t news at all.

The state of Illinois, for instance, is famous for delays to various suppliers, and it hits small businesses particularly hard, since they generally have a lower cash “cushion” to begin with. There has been a periodic scuffle about this issue, but not a long term plan to fix it.

In Europe under austerity it has gotten so bad that there are many cases of business people committing suicide, at least per this article (originally appeared in the NY Times).

The Italian state alone owes more than $90 billion to entrepreneurs. Some have been waiting to be paid for up to two years.

There doesn’t seem to be a compelling moral basis for why any government would routinely pay their own employees regularly while waiting an interminable amount of time to pay suppliers, who are citizens and taxpayers, too. Late payments to these suppliers don’t raise hackles, and in fact is “business as usual”, while delays of even a single paycheck cause howls of protest and are written up in newspapers.

If paying employees late is such a heinous act, then apply that same logic who provide services to the government but AREN’T government employees and treat them with respect, as well. Failing that, pay both the employees, the elected officials, and businesses at the same time.

14 thoughts on “Pay Government Employees When You Pay Suppliers”