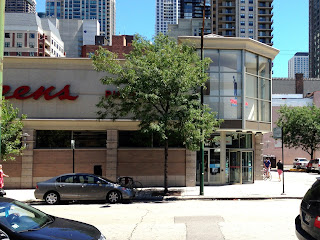 For those of you reading this post from the suburbs or rural America you won’t know why this photo of the River North Walgreens drug store is so unique, but city dwellers might if they ponder for a bit… The answer is –

Because there are no bums out front

For people who live in the city, especially women, the presence or absence of bums or aggressive panhandlers in fact is a serious criteria for selecting where you live, shop and eat.  This Walgreens in River North usually has a crew of bums accosting everyone going in and out of the turnstiles, like clockwork.

After a while you subconsciously avoid those places and favor other places.  Another common bum congregation zone are churches.  I usually walk on the other side of the street whenever churches are in my path, except for the brief times when the churches are fully of happy people all dressed up which would be a wedding.

Someday I will walk through the loop and count how many times a day I am asked for money or asked to buy something of no value (i.e. the magazine “Streetwise”).  It has to be in the dozens of times.  Another common topic of interaction – “can I ask you a question?” is that they have lost their bus pass / CTA pass / need some money for the train back home.  This “line of inquiry” is consistently heard anywhere near the commuter rail stations.

Businesses would be wise to hire security of some sort or use their own managers to figure out how to minimize the presence of bums and panhandlers and aggressive street people on their premises.  I’m sure many of the smarter businesses have already done this.  Women in particular will likely shy away from your establishment if they have to run a gauntlet in order to patronize it.

I feel sorry for the tourists that actually interact with these bums and panhandlers.  Their kids are usually surprised and the “smart” bums will try to strike up a conversation with the children that after a brief start of recognition the parents are quick to want to get out of.  This is a good tactic to get a buck, and quite sneaky.