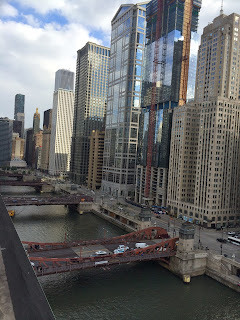 As a long time city of Chicago resident I have seen the immense growth of new buildings and new residents in areas near downtown which previously had been office buildings, warehouses, dilapidated structures, or simply abandoned.  From time to time when I am in an architectural bookstore I glance at books about “new urbanism” or various similar concepts that authors and “urban planners” use to overlay atop the actual growth of a city (or decline, in the case of other parts of Chicago).


If you are from a smaller town or relatively slow moving US city and haven’t been overseas to see “real” growth somewhere like Hong Kong, China, or India, then Chicago’s growth over the last decade or so that I’ve lived near down is pretty astonishing.  In River North, where I live, literally dozens of high rise buildings > 15+ stories have been built and are filled to the brim with owners and renters.  The entire South Loop has been renovated not only with town homes and large buildings, but huge retail spaces like Target, Costco, and giant movie theaters.  While there were many restaurants in River North when I first moved here, we had to walk far and wide to find even a place open for a decent breakfast; now we have a dozen to choose from within 6-8 blocks.


Since there are train tracks downtown for the Metra commuters which arrive from suburbs from all directions (except East, where the lake is) and many of these tracks are on ground level, the streets are cut up and there are sidewalks I used to take under viaducts with few people around.  Now, however, immense apartment buildings have popped up (over 40+ stories) and in the morning there is a huge population of well dressed professionals walking along these routes and sidewalks, where previously there was just debris and parking lots.  If I go to work late it is either single women walking dogs or nannies pushing single babies in strollers.


There must be 50,000+ well heeled urban residents packed into this place, all arriving from somewhere else whether it is a suburb, another state, or another country.  None of them are poor – you can’t be – since rents are in the thousands and move up rapidly, and every new building coming up has more amenities than the competitors in order to attract residents.  The demography is very fluid because many of the condominium owners rent out their units, and then the newer buildings have been built as apartments since the real estate crash of 2008.

If you are in Iowa or a rural area or even a city of 250,000, there are likely more eligible professionals in a single bar or restaurant in this area than there is in your entire city.  It is simply astonishing how fast the area has grown and how every square inch is taken up with clubs, restaurants, high end interior design, and the other “requirements” of the upwardly mobile professional who lives in a smaller condominium or rental unit.  Come out on a Friday or Saturday night it is a sight to be seen with everyone staying out late and careening from bar to bar tottering in high heels and smoking outside the door.


What hasn’t been built, at least in my experience, is a single new school.  There is no investment in the “typical” infrastructure that you’d expect to see.  I have relatives in a far distant “exurb” that is struggling financially because they kept expanding schools as their population boomed, and when the boom stopped, they were stuck with excess capacity that could not be supported with their available property tax revenues (which also declined with the loss of value of real estate).  That sort of investment hasn’t happened here… not a single new school that I’m aware of on any sort of scale with a mass of wealthy residents in a very short time.


There also have been no churches and almost no parks.  Parks are apparently a nice-to-have, because the city hasn’t created many new ones.  There is one called “Erie Park” in River North by the River but that’s about it.  The cost of a park in an area where you can put up a $100M building in a relatively small plot of land must be astonishingly high, and the city isn’t making those sorts of investments, apparently.  As far as churches, the ones that do exist (they must have seen some dark days in the 1960’s – 1980’s as the area emptied of residents and went to the dogs) seem to do a relatively brisk business in weddings and AA meetings (you can see them camped out on breaks, smoking and drinking coffee) and perhaps even picked up some new attendees.


If the “new urbanism” and “urban planners” did anything to facilitate what is happening in Chicago, I don’t see their mark anywhere.  The buildings were put up with private capital, and only things that are profit-making have been built beside them, with pitifully few exceptions.  It is astonishing to me to see all of these well-heeled professionals packing every building, and new buildings literally go up every single day.  Traffic has gotten horrendously bad, but this doesn’t bother a lot of people who walk to work and / or take the “L” or even ride bicycles (although I think they are crazy to do that because the traffic seems so dangerous).


Someone from another country asked me if Chicago was as bad as it seemed on the newscasts.  I said that the statistics are true but there really are two cities; one prosperous, clean and full of new residents, and one that is facing terrible problems and overrun by crime.  The investment in just one building in River North is likely larger than the entire value of new housing / investments in some of these other districts; they are simply falling to pieces and being abandoned.  As you drive along the highway you can see buildings with a big red X in a sign by the door – this means that the buildings have been designated as abandoned and apparently this will prevent firefighters from losing their lives trying to go through these buildings when they (inevitably) catch on fire.


Someone should write an objective book about River North and the tremendous growth here, and try to figure out what happened, and why.  It is the opposite of the Detroit story, although many aspects of the Detroit theory are happening in poorer districts in Chicago.  One key element, often missed, is the complete transition of people; literally no one who lives in River North, the West Loop, or the South Loop, today – lived there prior to gentrification or rebuilding from scratch.  No one.  Not a single one.  Cities do thrive or die on creative destruction, and the same people don’t make that transition.  The older people are priced out or displaced, and new, wealthy ones move in.  In other cases, like Detroit, people move away, and no one moves in (except in downtown where Dan Gilbert is trying a bit of the River North strategy with a small, high density area of professionals with high security).