Recently I moved to Portland, Oregon. Portland is a very clean and safe city, albeit one with a lot of homeless people allowed to camp out on the street. Crime here is miniscule by the standards of Chicago – rather than seeing murders every day (with multiple murders and shootings compressed into one story since it isn’t “news”), you can actually see leading news stories about a guy who got his bike stolen, with a picture of the thief from a security camera.

Now Portland is in the national news for a different reason. After the election, protestors have been taking to the streets. I was in a cab back from the airport Thursday night and my twenty minute ride became a 1 1/2 hour ride since the protestors were blocking bridges and highways. It was a bit unnerving because you were just sitting in traffic with no information and it could go on indefinitely. 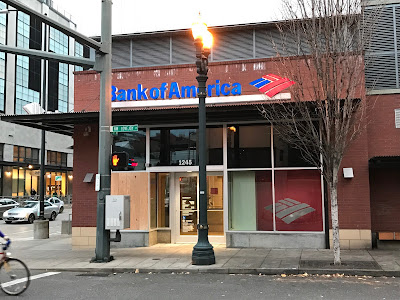 The protestors have been walking through neighborhoods and shopping areas and blocking bridges and the police have mostly left them alone. They did break business windows in an area less than a mile from where I live such as this Bank of America ATM bank branch. They set a couple of fires in dumpsters too. But generally they were pretty calm and the police followed them and didn’t bust their heads, Chicago-style.

I think many of the protestors were not happy that the anarchist or “black bloc” type protestors had joined their ranks and were smashing windows and the like. Some of the protestors raised money or came out the next day to help locals clean up. I heard an anecdotal story about a store owner coming out with a gun in front of his shop; Oregon has very free gun laws and outside of the Portland main city (which is mostly full of liberals and transplants from California and the like) you’d be unwise to try to bust up someone’s home – you’d likely get shot. 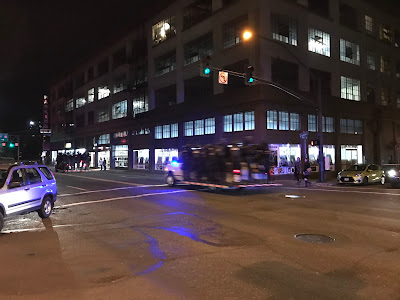 The police are finally get sick of this. Last night I walked out to get a pizza and 2 police trucks drove by with riot police holding on to the side of the truck, ready to jump out and get into position quickly. There were a couple dozen officers on the two trucks and they were driving rapidly across Burnside (a main street) to deploy somewhere. The act of calling it a “riot” by police meant that protestors could be charged with a felony and the police were trying to separate the ones causing damage from the peaceful protestors.

We will see if this dies out soon. I will keep you posted from Portland.