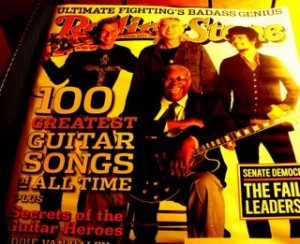 In any list like this, there is subjectivity. However, this Rolling Stone list is so full of ridiculous biases and blatant misses that I threw the magazine down in anger. For I am quite qualified to comment on this topic, basically having spent my entire life listening to and / or playing these types of guitar songs.

I will briefly digress on Rolling Stone’s sins:

– Pretending that random, ’60s blues guitarists and obscure people like Paul Butterfield belong on the list
– Selecting songs based mostly on politics… for example they take the Jimi Hendrix song “Machine Gun” (over “Crosstown Traffic”) solely because Jimi referenced some anti-war protesters in his introduction
– Picking useless Rolling Stones favorites like Bruce Springsteen and pretending that they should get here just because they are politically correct (these are guitar songs, remember)
– Just missing out on trends that need to be hit hard… classic rock in the ’70s, heavy metal in the ’80s and grunge in the ’90s. Sure there were a few hits, but way too many misses

Below is a list of all the Top 100 songs (per Rolling Stone) and my categorization of these rankings on a scale of 0-4 as follows:

My analysis is pretty straight-forward. If Rolling Stone put together the best list (in my opinion, but since it is our blog, my opinion is all that matters) then their score would be 4 (score) times 100 songs or 400. As it turns out, Rolling Stone batted very poorly… and less than an average of 2 (1.96 to be exact). Here is how it “broke down” (literally) – 27 right on, 15 that we’ll let slide, 17 with the right artist, wrong song, 9 close, and 32 off by a MILE.

How to fix it? Let’s start with replacing the “Right Artist, Wrong Song” elements on the list.

These fixes make a big improvement on the list… but what about the rest of them? Here are 41 songs to replace the crappy ones I noted up above.

Even I don’t have enough energy and time on my hands to come up with this list ranked 1-100. However, here is my take on the top 10, in no particular order:

– Jimi Hendrix – Purple Haze (like a broken watch, even RS is right a couple times / day)
– Deep Purple – Smoke on the Water (CAN’T BELIEVE THAT RS MISSED THIS ONE… didn’t they ever pick up a guitar?)
– Ted Nugent – Cat Scratch Fever (Also missed, even the Pantera cover version beats 1/2 their picks)
– Helmet – Unsung (a monster song, also missed)
– Ozzy Osbourne – Over the Mountain (also missed completely, that solo is mesmerizing)
– Heart – Barracuda (also missed, can’t you hear that chunky riff in your head?)
– Blue Oyster Cult – Don’t Fear the Reaper (I don’t know what to say… absolutely iconic even with the cowbell)
– Van Halen – Ain’t Talkin’ ‘Bout Love (the hit that put them on the map with the guitar sound that revolutionized everything)
– Prince – Let’s Go Crazy (for a pop artist he plays a hell of a guitar, and that middle solo is great, also missed completely)
– Alice In Chains – Man in the Box (that sound is as responsible for grunge as Kurt)

So… out of my top 10 (which I really don’t think are that controversial, for the most part) – only 1 was also picked by RS.

All in all Blender is much better and takes more chances than RS… even when I disagree with Blender, I generally respect their choices.