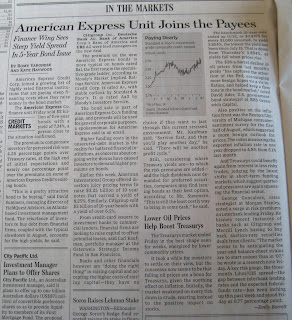 Back in early 2007 I wrote an article about the bond market that noted the lack of a “risk premium” for corporate bonds. The “base” rate for corporate bonds is what the US government pays for treasuries of equivalent duration – at the time I wrote that article corporate bonds with good credit were paying only 1% higher than treasuries and “junk” bonds only 4% higher than treasuries. The conclusion of my post was that it made no sense to take on all the known and unknown risks of these bonds for a paltry 1% incremental return (or 4% in the case of the riskiest assets).

Per this article in August 16, 2008’s WSJ titled “American Express Joins the Payees”:

“American Express Credit Corp. joined the growing list of highly rated financial institutions that are paying steep financing costs when they raise money in the bond market… the premium to compensate investors for perceived risk was 4.25 percentage points over treasury rates.”

These financial institutions are finally offering returns that might be worth considering, given their high risk (as Bear Stearns showed us all, and that Fannie Mae and Freddie Mac would have if the government would have allowed them to go under without their now-explicit guarantee).

Here is the kicker, though:

“From credit-card issuers to investment banks to commercial lenders, financial firms are looking to raise capital to offset potential losses.”

Traditionally, debt was raised and matched against long term cash flows. For instance, if you wanted to raise money to build a big plant or make an overseas investment, you would borrow the money, use it to build the facility, get it up and running, then start paying interest, and earn enough money over the life of the facility to pay back the original principal. Along the way you need to earn more on your facility than the “cost” of the interest along with the original investment, which is your return. This is a highly simplified example, but generally in line with traditional thinking.

However, if a company has immediate or lurking losses (those that they expect but haven’t disclosed), and then their raise cash from investors with long-term maturities, now that is scary. This is scary because the company is not “investing” these proceeds at all – they are using them today to pay off losses that already occurred. Then the company has to earn a return on other assets (or borrowings) sufficient to pay off this money, plus a return on top. Gulp…

ANALOGIES TO OTHER ASSET CLASSES

I think that another element here is that investors aren’t really “believing” the rating agencies anymore. The rating agencies gave high marks to Bear Stearns, for example, until right up to its demise. These super-complex financial institutions, with off-balance sheet entanglements such as CDO‘s that can’t readily be understood, are very hard to value in terms of risk.

This situation is similar to that of the audit firms, right before Sarbanes Oxley. There was a moment when Parmalat, the big Italian firm, seemed to be going under, and someone wrote an article saying that they had audited financial statements, and so wouldn’t that help assuage the market? At the time, however, the audit firm’s credibility was so low that investors weren’t valuing published and audited financial statements as being worth the paper that they were printed on. The rating agencies may be sliding towards that same sad state (since then the audit firms have changed significantly and they are viewed much more credibly by the market, even more so after the death of Arthur Andersen).

A similar situation occurs when investors take high risks in search of yield. After the government lowered the double-taxation on US corporate dividends (they are paid once by the corporation, and again by the individual), more companies raised their dividend rates to investors. It is common to view the “yield” on stocks and compare them to bonds – for example stocks are usually around 2% or so overall with bonds of course being above 5% (now a lot higher). For example I bought a few shares of an ETF with a ticker DVY, which is the “IShares Dow Jones Select Dividend” instrument that invests in companies that pay a high dividend with a history of continually paying their dividend and raising it, as well.

This hasn’t worked out so well for me. I bought in a few years ago, at about $60 / or so a share. It bottomed out as low as $49 / share recently before going up a few dollars. All the while it has given off dividends and currently has a “yield” of about 5% (which is worth even more than 5% because interest from a corporate bond is taxed at ordinary income rates which are in the mid 30% range while qualified dividends are taxed at 15% for US companies and US citizens). The yield was nice, but the underlying asset was pretty volatile too, which shows the potential peril in investing for yield.

The part to remember, across bonds and dividend stocks, is that profitability must be maintained in order to keep the payout and either return the principle (bond) or maintain the stock price (dividend stocks). In today’s environment often that is a bad assumption.

I would once again extremely caution anyone that is buying debt from an institution that basically plans to use this money to pay off losses that it already has occurred… this is a bad sign, you would always rather see them use this money for future growth (or perhaps to pay off even higher interest loans already on the books).

If you do buy debt, make sure that the risk premium is worth the actual risk that you are taking on. If it isn’t, stick to guaranteed investments and sleep much better, for only a bit less money.

6 thoughts on “The Return of the Risk Premium”