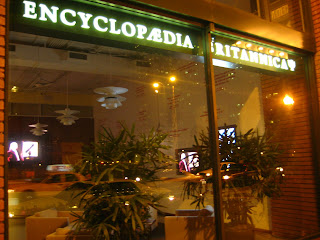 Encyclopaedia Britannica is the venerable institution that prints all of those bound volumes that you had at your house (or your grandparent’s house) when you were a kid. Interestingly enough, their headquarters is right here in River North Chicago, and I walk by the building often on my way to work (it is on LaSalle Street, just North of the Chicago River.

When I mention Brittanica, the first thing that most people say is “Are they still in business?” This was Dan’s exact question when I mentioned that they are headquartered here in Chicago.

Early on, when the web was first starting up, many companies had the idea that capturing information would be a big money maker. For example, Microsoft has an encyclopedia called “Encarta” that was big news back in the ’90s, when it was battling Brittanica for leadership. About this time Microsoft also started up their online movie database “Cinemania” which was also popular for a while as an attempt to create valuable content.

People did pay for content back in the early days, when the web was somewhat of a novelty. I remember a good friend who bought Cinemania and loved it, since he was a giant movie buff, and he got a big kick out of being able to search through all the data and reviews and see some clips, as well. I think at the time if you mentioned that this all would be on the web, it seemed pretty far fetched, especially since home high-bandwidth broadband was a long ways away and we were stuck with dial up (remember all those AOL CDs in the mail?).

Cinemania was one of the first to give up. Cinemania was supplanted by the all-encompassing IMDB, or Internet Movie Data Base. IMDB contains content generated by employees and also opens up content to individuals who make additions. It seems like IMDB is now unstoppable… with a mix of free content and paid content.

Encarta still lives, as does Britannica, in both print and online form. However, the unstoppable competition for both is of course… Wikipedia.

In an irony-laden move, I learned the most about Britannica from their Wikipedia entry. From the entry:

I would view Encyclopædia Britannica as a competitor, except that I think they will be crushed out of existence within 5 years.
–Jimmy Wales, July 28, 2004

For those that don’t follow this type of internet trivia, Jimmy Wales is the founder of Wikipedia. While derided initially and compared unfavorably to Britannica, the critics missed a few essential points about what makes Wikipedia great:

1) people have a great desire to contribute and show off their knowledge, even if they are not being compensated for it, as long as they are recognized even with the community

2) things that people can continually improve upon (like open source software, and Wikipedia entries) inevitably beat closed systems because they continually get better until they overwhelm the “closed” model. No company is rich enough to support a closed model that can beat the army of motivated (if unpaid) individuals

If you remember back in the start up days of the internet, everyone was building their own content in-house, and if you said that an unpaid army of volunteers would build gargantuan mounds of content (and in ever-increasing quality as well as quantity) you’d be laughed out of the room.d

Here in Chicago we walk by the last of the old, clinging to the status of the paid “expert” model, while the unpaid “masses” model streaks by, never looking back, out in cyberspace.