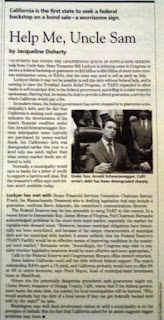 The municipal bond market is a critical source of funding for states and local government in the United States. These bonds are traditionally free of Federal taxes (assuming they meet some criteria, which most of them do) which allows them to raise money about 25% cheaper than equivalent taxable bonds of the same credit quality, all else being equal. Bonds are also often exempt from state taxes in the state that originated them, a concept that required a 2008 supreme court ruling because of allegations that it violated interstate commerce rights.

In general, municipal bonds have lower default rates than other equivalent bonds based on prior history, and the recovery rates for those bonds which DO default is higher, as well. As a result of these historical trends, municipalities are generally able to issue debt at lower interest rates and find buyers.

While history is important, I would be wary of the market right now. As you can see in this article, the governor of California is starting to request that the Federal government provide a backstop for their bonds. In a prior article, I noted that the entire issuance of an Illinois bond sale went to a single purchaser, who just happened to be a big bank receiving large amounts of Federal funds (it helps sometimes to have lots of people from Illinois in the White House, I guess).

One item to note is that sometimes when markets fail, they don’t do it gradually, they do it as a grinding halt. For example, markets that municipalities used to refinance debt at short-term rates (auctions) failed in February 2008, as a predecessor to the big credit crunch which happened later in the year.

I don’t have a crystal ball but there are many ominous signs today in the municipal bond markets, especially for states like California. Given the heavy democratic base in that state, I’d expect some sort of Federal intervention, which could get messy, and will lead to unknown consequences. I would check your portfolio and do some thinking about what a moratorium on interest payments, for example, would do to you. You can also see how the Federal government is treating debt holders of GM, for example, which is to say very badly.

2 thoughts on “Municipal bond troubles ahead”