If you are interested in high definition radio, which is a relatively new service that is covering the major cities and is free, read on below. If you are thinking of purchasing a table radio or getting a new car, you might want to spend a bit extra and get a radio that is “HD Ready”. More below if you are interested…

HD (High Definition) Radio is free and over the air in your city. HD Radio has the following attributes:

– you need a special (new) radio to receive it
– HD radio is much higher quality than your typical FM broadcast (way better than AM)
– “new” stations are also available on your HD radio – for instance the local rock station The Loop 97.9 FM in Chicago has another HD station called “Loop Loud” that only plays heavier rock – right now they are playing a semi-obscure Tool song that you’d never hear on the regular dumb ol’ classic rock loop stuck on “Slow Ride” by Foghat – but each of these “new” stations is unique
– the “new” stations don’t have any commercials (the “standard” stations sound better but have as many commercials as the regular FM equivalent)
– there are no monthly fees
– the HD stations tell the artist and song name, which is great because I am used to that from satellite radio and keep glancing over to my radio when it is on and am irked that it tells me nothing
– some of the AM stations even broadcast over the FM frequencies on the “new” stations – this may sound unnecessary but I can’t get AM in my building because of all the interference so if I want to listen to live sports this is a good option 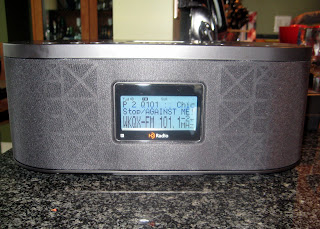 I bought a Sony HD Radio the XDR-S10HDiP at a local Best Buy for about $130 (I had a gift card, probably could have found it cheaper on the Internet). The HD radios I was looking at were desk models, and they are typically more expensive than a tinny clock radio because there isn’t much point in getting a high quality signal if you are going to play it through a tiny speaker.

There are a number of sites that show what stations are available in your town – this site has a decent explanation of what all the Chicago HD channels are (needs to get updated a bit because my mom’s favorite jazz station went Spanish-format, for example). 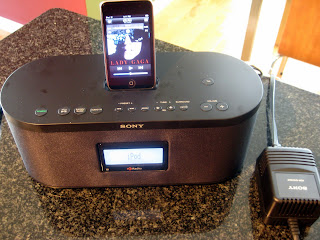 Another reason I bought this desk radio is because I wanted something to play my ipod through and to charge my iPod Touch 2nd generation. The iPod Touch 2nd generation has a notoriously poor battery life and I don’t like turning on my PC just to charge it up, so this is a better alternative. There also is a “tagging” function if you want to buy that song on iTunes, but I haven’t tried or seen much need for that yet. You can control your iPod through the remote which is very helpful, too.

One strange note – when you buy a radio and want to charge your iPod, make sure that the radio supports your specific brand. The first HD radio I bought charged the iPhone but NOT my iPod Touch second generation, and was bulkier, so I ended up giving it to my mom, who likes it a lot, and bought this Sony instead. I even stuck my iPod touch in the demo model to make sure it charged because I didn’t trust the specifications.

I would definitely recommend looking at an HD radio if you want to buy a radio to have around the house. It is fun looking at the new stations, especially since they have no commercials (for now), although they are all over the place. You can also use them to play your iPod or charge them, which is a big plus, and they are generally pretty high quality. I will make sure my next car radio has HD capability, too.