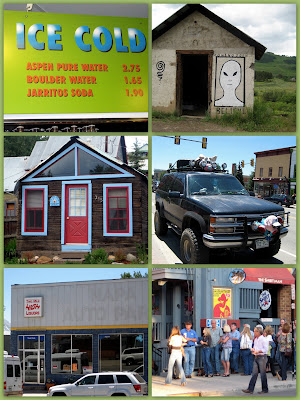 Here are some other oddball sights… in the upper left – EVERYTHING apparently costs more in Aspen – even their water (poor Boulder, CO). In the upper right – aliens have commandeered the house out in the sticks outside Crested Butte – although I’ll bet that alien is disguised as a dirty hippie in there if you look really close. In the middle left – the “Love Shack” is right in down town Crested Butte and it even has a web site right here; might be fun some time (and well located). I don’t know exactly what the “pig truck” is trying to accomplish in Leadville, but am mildly amused by the handicapped sticker on this monster(ish) truck. On the lower left – they are very particular about their altitude in Leadville, noting that it is TWO miles high as far as liquor goes (the mile high baseball field in Denver has a line in the upper deck indicating their mere one mile status). And finally, in the lower left, that species known as the coug*r (don’t want the traffic) await Kevin Costner’s band in Aspen… I didn’t even know he played (hasn’t had a movie hit in a long time).