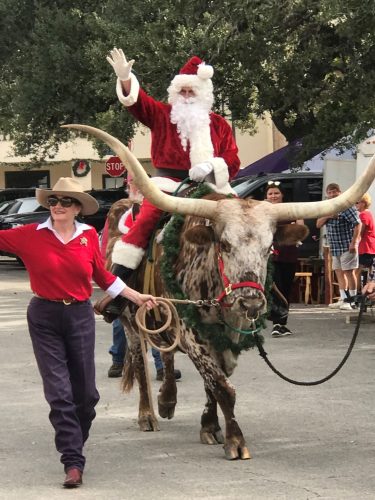 Local Photographer: “No, sweetie,  it’s Santa and his reinsteer!

So it appears that we are to have a new federal holiday – that day, following on the final defeat of the Confederacy that slaves in Texas were informed by the arriving Union troops that they were now free. I think it’s marvelous, noting the day when the last slaves in a Confederate state were notified by Republicans that they were no longer slaves.

With apologies to Wm. Shakespeare…

We inherited her from my mother – the last in a series of pedigreed ‘apple-head’ Siamese cats owned by my parents – when Mom fell catastrophically one morning in the kitchen of her house in Valley Center, California, and fractured sufficient bones in her upper spine to render her essentially a paraplegic. The house which Mom and Dad had built (the second on that site in Northern San Diego County), in which Mom had lived alone after Dad passed in 2010, had to be sold. There was practically nothing left of the original family relics, after the first house burned in the Paradise Mountain Fire in 2003, so all the furnishings went without a pang of regret from us. Ancestral bits and scraps which meant anything to us all had already been parceled out before the fire anyway.

But that left Mom’s pets; the dogs, which went to my sister Pip – and two cats, Davy and Isabelle, whom my daughter obediently hauled back to Texas from California. Davy was a stray, a bridle and white specimen, fairly elderly at the time when we took him in. He had been dumped in Mom and Dad’s remote neighborhood, escaped being eaten by coyotes, and scraped sufficient acquaintance with Mom and Dad and their next nearest neighbors to be considered for addition to either household. There may have been a coin-toss involved. Anyway, Davy was added to Mom and Dad’s pet collection – I don’t know whether they won or lost the coin-toss. Davy, having remembered starvation and escape/evasion was determined never to be hungry again, and was a hefty chunk-o-cat by the time he passed away of natural old age a year or so ago.

But this is about the other cat-inheritance, Isabelle.

We read this with much amusement earlier in the week in the Daily Mail– the lamentations of one Brett Alder, a California sales exec who moved his family to Austin apparently in haste and with minimal to non-existent prior research on his new home, who repented at leisure after a brief year and afterwards (upon moving back to California) expanded on woes and the general shortcomings of Texas in an editorial in Business Insider. The original column is behind a paywall, so unavailable to me, but the Daily Mail posted the list of his lamentations. This brought about considerable hilarity in the comments on the various articles which repeated the story, among Texans. The Daughter Unit and I found the article most particularly amusing – especially me; California born and bred, lived there without interruption (save two trips to Europe) until I joined the military, where for twenty years I moved frequently to new communities and wasted little time or heartburn on making a new home. I’ve lived in Texas since 1995 now, with occasional trips to the formerly-Golden State, the last one in 2010 when Dad passed away and I spent a couple of weeks helping Mom sort out things.

To continue with a fisking of Brett-the-male-Karen’s lamentations on life in Austin:

Yesterday at lunch a friend was circulating an e-mail her friend had taken as she’d run errands in Houston. Great video: hearse following Biden bus. Some overreaction (Can we stand four years with a humorless party in power? And how do they intend to use their power – to stop laughter and flags flying?)

I’ve long thought that the Babylon Bee does more to keep up spirits about next Tuesday than the greatest stump speech or endorsement.