I don’t know if it is true or not but I was told once that the writers at “The Onion” start with the headline and then write the story. If that is true, this is an example of an absolutely perfect headline that summarizes China’s role in Africa today: 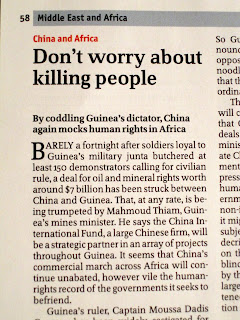 This article from The Economist describes how a large Chinese company is signing an agreement with Guinea’s dictator, a man who brutally put down a rally and killed at least 150 protesters who were calling for an end to military rule. While this type of activity horrifies the West (Guinea is a former French colony and they made strong condemnation of this activity), it doesn’t bother the Chinese in the least, who seem to be willing to cut a deal with anyone to obtain raw materials and resources.

While rules and regulations such as the Foreign Corrupt Practices Act limit US participation in Africa, there are obviously no such constraints on the Chinese, and they are going great guns in Africa. Many of these types of mineral agreements plow the money right back into the corrupt leadership that took power, usually through illegal means; the Chinese don’t seem to care.

One item that makes the Chinese substantively different than the West is that they typically build infrastructure; various sources (I can’t seem to find a solid one) say that over 1 million Chinese are working today in Africa, mostly on these types of projects. It is simply amazing that the Chinese are importing labor into Africa; surplus labor is about all that Africa has in abundance.

In many ways this shows the folly of the West’s policies and is almost an exact mirror of our plans for global warming; whether the threat is real or not, the Chinese are throwing up coal plants as fast as they can and making a mockery of any attempt to reduce carbon emissions world wide, since we all have one big atmosphere. In the same manner, the West is just writing themselves out of having a say at all in Africa by upholding high(er) standards while the Chinese just scoop up all the contracts.

The final irony is that at the back of this article Kagame in Rwanda, whom I profiled in this article about the War in Africa, is now thinking of throwing his lot in with the Chinese. After all, as the Economist points out, he is an autocrat.

12 thoughts on “China in Africa”