“One of Irina’s grandsons, nicknamed Riri, was sent to her at Christmas. His mother was going into hospital, but nobody told him that. The real cause of his visit was that since Irina had become a widow her children worried about her being alone. The children, as Irina would call them forever, were married and in their thirties and forties. They did not think they were like other people, because their father had been a powerful old man. He was a Swiss writer, Richard Notte. They carried his reputation and the memory of his puritan equity like an immense jar filled with water of which they had been told not to spill a drop.” – from the short story Irina, by Mavis Gallant (Paris Stories collection)

Paris Stories is a beautiful collection. The short story Irina has the most vivid sense of place – it’s all a feeling of hushed, chilled, snowy air outside, and the quiet of an apartment unused to children inside:

“At half past four, when the windows were as black as the sky in the painting of tulips and began to reflect the lamps in a disturbing sort of way, they drew the curtains and had tea around the table. They pushed Riri’s books and belongings to one side and spread a cross-stitched tablecloth. Riri had hot chocolate, a croissant left from breakfast and warmed in the oven….” 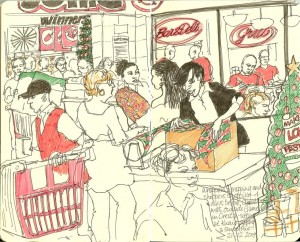 The above drawing – by Cathy Gatland – is from the website, Urban Sketchers. Urban Sketchers is one of the most interesting sites I have encountered this year. It’s a group blog for people who draw, and they draw, charmingly, what they see: The city life around them! It’s dizzying, the talent on display.

3 thoughts on ““One of Irina’s grandsons, nicknamed Riri, was sent to her at Christmas.””