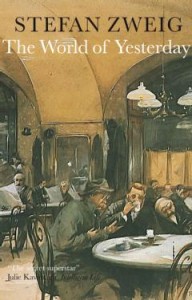 I asked for one thing for Christmas, Stefan Zweig’s book The World of Yesterday. Jacques Barzun, in his book From Dawn to Decadence: 500 Years of Western Cultural Life 1500 to the Present

spoke highly of the Zweig book, and I have wanted to read it ever since reading Barzun. My wife got the Zweig book for me, and I finished it this morning. It is the first book I finished in 2010, and the bar has been set very high for the rest of the year. It is one of the best books I have ever read.

Zweig tells his life story, growing up in an intellectual Jewish milieu in Vienna before World War I, in a golden age of peace and freedom (as only became clear after it was gone), becoming a successful writer and friend of many famous people, the ensuing destruction of European civilization in World War I and its aftermath, and ultimately his flight from Austria to escape the Nazis. He committed suicide in Brazil in 1942. He mailed this book to his publisher the day before he died.

and Gregor von Rezzori’s The Snows of Yesteryear

as depictions of the final years of Austria Hungary, and the cosmopolitan, open, secure, lawful and liberal European world order which ended in 1914 and has never returned.

47 thoughts on “Stefan Zweig, The World of Yesterday”