In this article titled “Why Many Investors Keep Fooling Themselves” by Jason Zweig from the Wall Street Journal, Mr. Zweig does an excellent job of explaining why individuals assume that they will receive a rate of return that is too high, which means that either they are not saving enough to meet their goals or that they are taking too much risk of running out of money.

This post describes what the rate of return means in practical terms, and why it is important.

One of the core elements of investing is the assumed “rate of return”. Along with your base investment (or amount that you are periodically adding, say annually), your time frame (number of years out you want to go), the “rate of return” is the percentage variable used to determine whether you will have enough to retire and / or meet your needs for a specific goal (such as will you have enough funded to send your child to college). 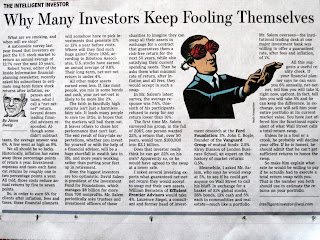 What is Rate of Return?

Basically, ignoring the math, in general, the higher your “assumed” rate of return, the greater your assumptions on your ending value. It isn’t “linear” – it is “geometric” – so a 2-5% difference in assumptions makes a GIANT impact if you are looking out 20-30 or so years.

When I started out investing about 20 years ago in my first 401(k) plan, people thought 10% / year was a reasonable assumption for equity returns. I don’t know what the assumption on bonds / cash investments were, but let’s say that it was 6% or so. Under these plans, if you set aside a decent amount towards your 401(k) and your company made a decent “match”, you could easily see your amount available for retirement grow to a seemingly large and acceptable number, assuming that you put most of your money in stocks (since you were just starting out in investing).

In year one, ending 12/31/00, the market goes down 40%, leaving you with $60,000. Gulp. If the market goes up a bit more than 10% / year over the next 4 years (your original rate of return assumption), then you basically end up back near your ORIGINAL $100,000 balance, after 5 years are done. This isn’t good, you could have left your money in a guaranteed account and done about that well. You just made NO progress towards retirement or towards a college education account.

Thus in order for your portfolio to be able to afford some occasional large losses (such as we received in 2002 with the dot-com crash and in 2008 as the credit markets seized up), you will need to make FAR more than 10% the OTHER years in order to reach a target as high as 10%. In fact, you will probably need to earn something like 20% every OTHER year in order to make up the lost ground of years that have big losses.

Basically if you aren’t seeing a return of something like 20% / year in MOST years on equities, you aren’t going to make anywhere close to 10% when you factor in our frequent years when the markets take big hits. Not only do you lose DOLLARS (your balance declines 20% – 40% those years), you also lose TIME for future compounding and your rate of return is much smaller than it appears.

If you go back to 1990 and ran the S&P 500 for 20 years, you’d get an appreciation of around 6% / year. If you just run the last 10 years, you get negative appreciation (no growth). I realize that stocks have a longer term horizon than this but these are the relevant milestones within my life. The “net” of these two, in very simplistic terms – around 3%, given that you are putting money in “in increments” and didn’t just have a lump of money at the start of 1990 and watch it compound all those years.

I had a friend who used to live in Las Vegas. He always said that the fact that they had lavish facilities and gave out subsidized meals and drinks meant that the house had a big edge, and that they always won in the end. While this is common knowledge, actually seeing the scale of their vast casinos put this “edge” in perspective.

The same thing applies to the big bonuses and huge financial services industry that exists in the United States; to a large degree, these institutions exist and can pay bonuses because of transaction costs that they put on customers such as yourself that invest in the markets.

Since the time I started investing in the 1990s transaction costs have fallen a lot. It was common to pay a 5% “load” up front when joining a mutual fund, on top of annual expenses in the 1% – 2% range. Nowadays mutual funds with a load have become much scarcer and transaction costs have fallen into the 0.5% range if you shop around a bit. ETFs, which also have big tax advantages, have risen in power and they also offer low transaction costs since the cost to trade a share of stock has fallen over the years (for mutual funds you typically don’t pay a transaction fee to invest, but you do for ETFs). It depends where you shop and what other fees to take into account but nowadays an electronic brokerage like TD Ameritrade allows stock trading for $9.99, a significant drop from the $30+ dollars it cost “net” back when you had to call a broker by phone in the early ’90s. This reduction is even bigger in “real” terms when you factor inflation into account.

While transaction costs have fallen, they still add up, and they eat into your return. Your return now has to “make up” for the “loss” years (and time), as I noted above, but also at least 1% / year in transaction costs for equities (all in). You probably could do it for less depending on how you structure your portfolio, or it could be higher if you trade a lot.

Taxes also impact your earned rate of return. There are many kinds of taxes that hurt investors’ returns.

1) capital gains – when you sell something that has appreciated in value, you pay capital gain taxes, which vary depending on how long you held the asset. Currently, the US has favorable tax rates for assets held > 1 year, it is 15% – this would rise potentially to 20% when these rates expire in 2010 assuming this is not renewed. Assets held less than 1 year are treated as ordinary income, which is as high as 35%
2) taxes on dividends – each year dividends are paid out from many corporations; since dividends are subject to “double taxation” (the corporation pays dividends after tax has been applied), the US has a favorable rate for investors who receive taxes of only 15% on US corporations. This is scheduled to expire and may or may not be renewed; if not they will be treated as ordinary income, assume 35% or so
3) taxes on interest – if you receive interest income, it is taxed as ordinary income, assume 35% or so. There are exceptions to this, but they also cut into your return – municipal bonds are (generally) exempt from Federal taxes, but they make up for this by offering a lower rate (a municipal bond might offer 3% when a corporation would offer 4.5% for the same credit quality bond)

While you can defer taxes by using various plans 401(k) and defer gains on other plans (IRA), and also completely avoid taxes by using funds for designated purposes (529 college plans), in general as the saying goes, you can’t escape taxes. You can structure your portfolio in a manner to minimize tax impacts (i.e. put interest income in IRA funds, and low dividend ETFs in your after-tax brokerage), but you need to factor in taxes into your implied return. They generally take off at least 1-2% of your return, but like all else, it depends. But it isn’t zero and needs to be taken into account.

In order to “earn” the returns listed above, investors need to act rationally. Investors, historically, have NOT acted rationally. Investors tend to buy after a stock has risen (chasing returns) and they don’t re-balance their portfolio after gains. They need to HOLD on to stocks after big losses have occurred, rather than selling at the trough, so that they can be there when the stocks “roar back” and go past the losses incurred.

Investors also tend to minimize their re-investments in stocks when they go down; this is human nature – when something has bitten you (stocks for losses), it takes an iron stomach to invest MORE money in stocks again. But in order to earn the rate of return that stocks (theoretically) can offer, you need to buy low and sell high (through re-balancing, effectively).

While research on the impact of investor behavior is all over the map, in general the “average” investor does much worse than his “rational” or “theoretical” counterpart. This probably drops 1-2% (or more) off the return.

In the article by Jason Zweig, he uses the term rate of return “net-net-net”. This means the REAL rate of return after transaction costs and taxes. Typically irrational investor behavior needs to be taken into account, too.

With all of this, that 10% rate of return is likely to be far lower; perhaps 5%, perhaps less. If you put those numbers into your model you won’t be retiring for a long, long time.

Cross posted at Trust Funds for Kids and LITGM

6 thoughts on “We Are Wrong on Rate of Return”