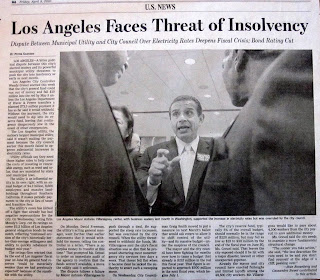 The Los Angeles Department of Water and Power (LADWP is the most common acronym) is a publicly-owned utility that serves the city of Los Angeles with water and power. LADWP is in the news right now because of a dispute with the city over a transfer that LADWP usually makes in the amount of 8% or so of its revenues. Since the city of Los Angeles is essentially broke (per the article, their reserve fund that should be in the $220M range will be down to $25M or $30M) this delay in transferring funds is putting the city close to the edge. This article is titled “Los Angeles Faces Threat of Insolvency” from the 4/9/10 WSJ.

LADWP is the largest municipal utility in the country. According to their annual report for the year ended June 30, 2009 which can be found here(most municipal entities end their year in June, not December like publicly traded companies), the power entity (not water) had the following key facts:

– annual revenues of $2.8B / year
– $6.6 billion in utility plant assets (net of depreciation)
– approximately 7200 MW of useful capacity, of which the vast majority is coal, hydro, nuclear power, or natural gas (renewables are 270 MW, or about 4% of the total
– in 2009 they transferred $223M to the City of Los Angeles, or 8% of revenues (of $2.8B)
– their pension plan for employees is 70% funded when unrealized investment losses are taken into account (not great, but better than Illinois)
– LADWP acquired natural gas assets in Wyoming in 2005. After the collapse of the California power market (where LADWP performed relatively better than their investor owned peers) they decided to go and get their OWN gas supply – the article from 2005 is here. I find it interesting that a non-profit electrical utility owns their own natural gas supply, but it probably seemed to be a good idea when the cost of natural gas was spiking up to $14 / unit (it is now down nearer to $4 / unit with innovative new exploration techniques)
– LADWP has been “hedging” against the price of natural gas, to ensure that the utility has adequate funds available if there is a price rise. As of June 2008, the value of these hedges was $213M (favorable), and as of June 2009 the value of these hedges is ($168M) unfavorable. This is likely due LADWP “locking in” at the price of gas somewhere above its current price near $4 / unit… this method will result in continuing (unrealized) losses as long as the price of natural gas stays low, which it appears to be on track to do for some time

LADWP is in dispute with the city because LADWP wanted to raise rates. LADWP said it needed to raise electric rates to pay for the new renewable energy commitment for the city of Los Angeles. The city wants to have 20% of electricity from “renewable” resources (this must include hydro, because their “true” renewable level is much lower, although no one can site new hydro plants anywhere due to environmental rules) which will require a massive increase in investment in generation and transmission assets because 1) renewables have a high cost / MW to install 2) most of the renewable generation sites (geo-thermal, solar) are not where the grid goes to today, so costly enhancements to the transmission grid are needed.

Per the LADWP web site:

According to this report (p13) commissioned to study the issue of the cost of moving to a 20% renewable standard:

DWP adherence to the RPS requirement is estimated to result in an incremental cost of service increase of approximately $284 million annually, with an aggregate cost needed to achieve the 20% RPS target requirement projected to exceed $2 billion.

In that same report (p11), they showed that the cost to build capacity of the actual renewable plants in use by LADWP was 82.2 cents / kWh while the cost of the “traditional” fossil fueled plants was 2.9 cents / kWh. Thus the “renewable” portfolio cost 28 TIMES as much as the non-renewable (traditional) portfolio for capacity; while the operating costs for the renewable facilities could be lower than the fossil fueled facilities, it would take a long time to make up this level of difference, especially after adjusting for reliability (which hits the renewable portfolio even harder).

None of this should be taken to say that LADWP is a badly run utility; they came out better than their peers when the energy market in California collapsed and they have a diversified energy portfolio. Their goal is to keep their rates 15% lower than their peers, which is a positive goal. However, the City of Los Angeles and the high bar for renewables is going to cause a massive rush of investment essentially to create a very modest amount of generating capacity, costing the rate payers a big rise in energy rates.

The City of Los Angeles rejected the rate increase, however, meaning that it is on hold for at least 3 months, per this article. This delay caused the utility to with hold their annual payment to the city, hence the article above.

Merger of Mirant and RRI

Mirant and RRI are merging to form one of the largest IPP (independent power producers) in the country. Here is a “fact sheet” about the newly announced merger.

It is interesting to point out the cost / MW for capacity for traditional fossil fuels vs. the cost for the renewable portfolio (including transmission). The market value (stock market, not debt) of the combined company is about $3B, and it has almost 25,000 MW of power.

To put it in perspective – the City of Los Angeles is pushing LADWP to move to 20% of its 7200 MW portfolio in renewables, or about 1440 MW. The cost of this (including transmission), is about $2B per the article above. However, they could have bought an entire fleet of working, reliable plants with 25,000 MW (about 17 times more) for only $3B on the open market. Now these aren’t “apples to apples” comparisons but ironically a lot of the assets, over 3200 MW, are in Southern California, per the fact sheet. Thus these assets traded hands for a pittance and WILL BE USED TO POWER CALIFORNIA and yet to build these new renewables they are going to spend $2B to offset a portion of these costs.

Madness. Someday someone is going to look back on this as if we are all insane. We are spending billions to retire a tiny portion of capacity while we purchase more reliable assets already on the transmission grid and serving those same customers for comparatively pennies on the dollar.