In my years in medicine, which began in 1961 or even earlier with premed, I met a few very colorful teachers. From time to time, I would like to profile some of them lest they be forgotten as people and remain only an entry in a dusty bound volume in a library. One such was a neurosurgeon named Aidan Raney. When I began to do a little research on him, I found that Google searches turn up only his son, a very good cardiac surgeon in Newport Beach. I remember the son as a high school student I met once.

When I was a third year medical student, my medical school had a program in which students could spend a summer with private practice physicians to see what the life was like. I spent a summer with Aidan Raney. I wasn’t so much interested in neurosurgery but wanted to see more of it before I committed myself to a career. Doctor Raney had been the first neurosurgery resident at the new Los Angeles County Hospital after it opened in 1933. The old hospital, now torn down, had been in service since about 1913. The University of Southern California medical school, which had closed in 1920 as a consequence of the Flexner Report, reopened when the new hospital opened and graduated its first class in 1932. 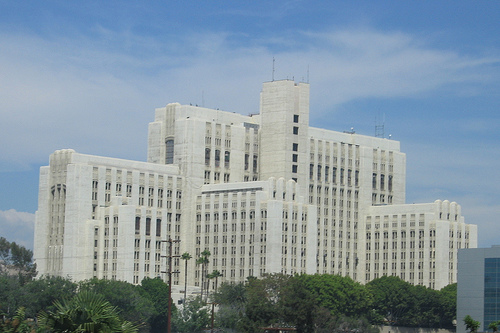 If that building looks familiar, it was the backdrop for the TV soap opera “General Hospital” for many years.

One day that summer, Dr Raney and I were walking into the “Big County,” as it was called locally, as he was telling me what it was like to be the only neurosurgery resident in a 3500 bed hospital for two years. He said, “Then I got Frank Anderson as a junior resident in 1940.” Frank Anderson became a well known pediatric neurosurgeon in Los Angeles later. He also provided a little time off for his senior resident who had not been able to go home for two years. He lived in the hospital. Sleep was a precious commodity so he had customized his call room on the 12th floor where all the call rooms were. In the 1930s, desk telephones were not yet a feature of Big County so the call rooms had arrangements similar to apartment building lobbies where a speaker and a mouthpiece are mounted on a wall panel. The caller stands at the wall and talks into the round mouth piece. My grandparents’ apartment building in Chicago had one exactly like it except the hospital unit had a dial. He was describing to me how he had customized the phone so he could operate it while lying in bed. He taped a long funnel to the mouthpiece and hung the funnel end from the wall at the head of the bed. With that, he could talk into the phone without getting up. He solved the dialing problem by winding a string around the hub of the dial. He tied a pencil to the end of the string and drew marks on the wall that corresponded to the numbers on the dial. he would pull the pencil down to the appropriate number and let it go up again. That was how he could dial an extension from bed.

Finally, he said, “Come on, I’ll show you where it was.” We caught the elevator and went to 12. We walked down the hall, which was lined with call rooms for all the specialties, until we got to Neurosurgery. He opened the door and we walked in.

There was the funnel and the string around the dial of the phone with the pencil tied to it. Neurosurgery residents had been replacing the string and retaping the funnel for 23 years. I’m sure that the originator of this device was long forgotten. But there it was. Dr Raney had not been in the room since 1942.

A year later, the 12th floor was gutted and remodeled for a new private service. A little bit of the history would be lost.

He was quite a raconteur and enjoyed talking about his life. After finishing his residency, he had been nearly finished when the war started, he went into the army and wound up in Normandy in June 1944. He was doing the head cases for a battalion level or division level field hospital. Once he had done what was necessary, the casualties were evacuated to England. The weather was hot and they worked in a tent operating room. They rolled up one wall of the tent so that only a mosquito net enclosed that side of the operating room. He said that the ambulance drivers, when they were not picking up casualties, used to sit on some boxes and watch him operate. Head surgery is easier to see than most other types because the surgeon is sitting down and the top of the head sticks out of the drapes.

Anyway, as the summer went on and they eventually began to move north and east, he got busier and busier. Finally, he went to the hospital commander and said he had to have another neurosurgeon. He was exhausted all the time. The commander checked around and told him that nobody else was seeing that many head cases. He investigated and learned that he was getting the head cases from most of Normandy ! The ambulance drivers who had been watching him operate had come the the conclusion that he was the best neurosurgeon in Normandy and brought all the tough cases to him. They would drive 50 miles to bring a terrible case to his unit.

He said after hearing that, he rolled the tent flap down.

He and his brother Rupert, while in private practice, made major contributions to neurosurgery and quite a few instruments still in common use are named after them. The scalp is very vascular and, as anyone who has had a scalp laceration knows, it bleeds fiercely. The Raney clip is used to control the bleeding. A row of clips is placed all along the incision and removed when the scalp is to be closed. All neurosurgery uses them. The Raney perforator is a powered drill that Aidan and Rupert invented in 1941 and is still in use. Rupert died young (1959), I think of a heart attack, so Aidan decided to slow down. When I knew him, he did his surgery in the afternoon so that, if he did not have a case scheduled, he could play golf. It seemed to have worked because he lived to 92.

4 thoughts on “Education and traditions.”