The Russian invasion of Ukraine has set off radical changes in international relationships. The US and other (not all) European nations have imposed severe sanctions on Russia designed to destroy its economy. The precedents set are not all positive. First Ukraine has defined corruption for years. The Biden family and even Mitt Romney’s family got positions on a Ukrainian gas company’s Board for lots of money and no work except influence. The “Maiden Revolution” in 2014 was engineered by the Obama CIA. It expelled a pro-Russian president duly elected in an election probably more honest than the US 2020 election. Not all agree that it was an honest process.

As Ukraine’s political crisis deepened, [Victoria] Nuland and her subordinates became more brazen in favoring the anti-Yanukovych demonstrators. Nuland noted in a speech to the U.S.-Ukraine Foundation on December 13, 2013, that she had traveled to Ukraine three times in the weeks following the start of the demonstrations. Visiting the Maidan on December 5, she handed out cookies to demonstrators and expressed support for their cause.

The extent of the Obama administration’s meddling in Ukraine’s politics was breathtaking. Russian intelligence intercepted and leaked to the international media a Nuland telephone call in which she and U.S. ambassador to Ukraine Geoffey Pyatt discussed in detail their preferences for specific personnel in a post-Yanukovych government.

Ukraine has remained an economic basket case in spite of the change to a pro-western government.

The furious reaction to the invasion by US officials has alarmed some nations that have remained neutral. Some of them have been our allies, or at least friendly.

In a development that suggests trouble ahead, China’s basic approach—not endorsing Moscow’s aggression but resisting Western efforts to punish Russia—has garnered global support. South African President Cyril Ramaphosa blamed the war on NATO. Brazil’s president, Jair Bolsonaro, refused to condemn Russia. India and Vietnam, essential partners for any American strategy in the Indo-Pacific, are closer to China than the U.S. in their approach to the war.

Western arm-twisting and the powerful effect of bank sanctions ensure a certain degree of sanctions compliance and support for symbolic U.N. resolutions condemning Russian aggression. But the lack of non-Western enthusiasm for America’s approach to Mr. Putin’s war is a phenomenon that U.S. policy makers ignore at their peril.

The dominant role played by the “Woke” left and the Green New Deal enthusiasts in the Democrat Party has concerned many of them. Right now, Democrats hold all three branches of government, although narrowly.

The Canadian truckers’ protest has been prominent on alternate media although ignored by “corporate media.” After 50,000 truckers got going on the way to confront the Trudeau regime in Canada, millions of dollars were donated to a “GoFundMe” crowdsourcing site. The donators should have checked the history of that outfit because they have a history of refusing conservative causes. One, of course, was the Kyle Rittenhouse case in which they refused to accept donations. Even after his acquittal, they refused.

The trucker funding reached $10 million and GoFundMe tried to appropriate the money to give to left wing causes like Black Lives Matter. Immediate pushback began with Elon Musk. 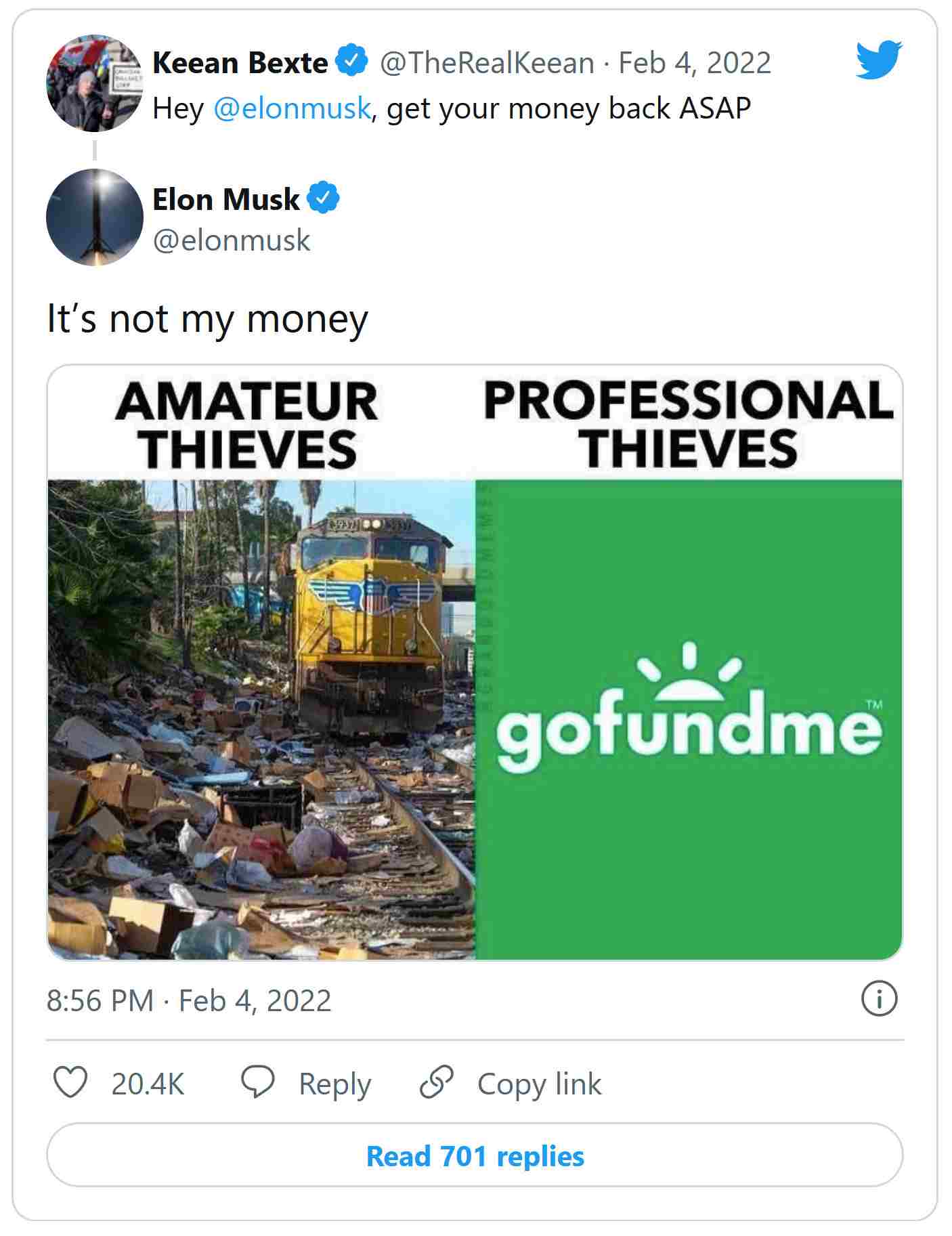 Now, the threat of charge back fees has caused GoFundMe to retreat and promise refunds.

The backlash against the crowdfunding company was fast, massive and direct. Facing legal action, U.S. state lawsuits and massive charge-back fees from outraged donors contesting refunds through their banks and credit cards, GoFundMe had an overnight change in position: 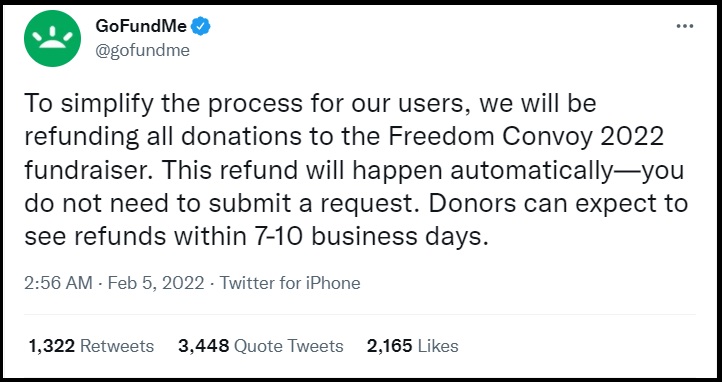 Now, the Trudeau regime is threatening retaliation, including arrest. The towing companies were first asked to tow the trucks away. They responded that their drivers all had Covid and were unavailable. Then the Mayor of Ottawa threatened them with the Canadian army. The army has responded a refusal.

Paul Vieria, the Canadian correspondent for the Wall Street Journal, tweeted yesterday that a spokesman for Canada’s defence minister, Anita Anand, said: “The Canadian Armed Forces are not involved in law enforcement in this situation, and there are no plans for such CAF involvement.”

Spokesman for Canada’s defence minister, following comments from Ottawa police chief Sloly on possible need for military’s help in trucker protest: “The Canadian Armed Forces are not involved in law enforcement in this situation, and there are no plans for such CAF involvement.”

An interesting report from an Ottawa resident is here.

There is now growing interest in organizing a similar protest here.

The American Truckers formed a Facebook group that as of Sunday has more than 67,000 members.

The page states that they support freedom and they are done with the mandates.

“We are part of many large groups who believe in our founding fathers. We believe everyone has a voice. We support our freedom. Help us spread the word about this group and together we all can make it a better place.. God Bless America,” the page reads.

The group has not yet announced it’s start date – but says the convoy will be scheduled soon.

DeSantis has announced that the GoFundMe decision to confiscate the donations is mail fraud.
That now appears to be moot as the crowd funding company has retreated from its threat.

What is the next development? Maybe this ?

There is considerable talk in the media right now about Russia and Ukraine. Russia has moved troops close to the Ukrainian border. The Biden regime, which has no interest in the US southern border, has expressed alarming determination to stop a Russian invasion of Ukraine. Why are they so interested in a corrupt country that has no strategic importance to us ? Certainly the Biden family has profited from Ukraine. Hunter Biden, who seems to be the family bagman, was paid $50,000 a month by the Ukraine Burisma gas company.

The board appointment for someone who had no experience in the energy industry or in Ukraine came just months after Hunter was discharged from the U.S. Navy Reserves after testing positive for cocaine.

Burisma’s board chairman, Alan Apter, said, “This is totally based on merit.” Apter added: “The company’s strategy is aimed at the strongest concentration of professional staff and the introduction of best corporate practices, and we’re delighted that Mr. Biden is joining us to help us achieve these goals.”

Recently, the president of Ukraine, in a phone call from Biden, is alleged to have told Biden to “calm down.” The transcript of the call has not been released.

Why the threats, including moving 8500 US troops to eastern Europe ? Back in the 1990s, there was a movie called “Wag the Dog.” The plot was “Shortly before an election, a spin-doctor and a Hollywood producer join efforts to fabricate a war in order to cover up a Presidential sex scandal.” Is that what is going on now ?

Tomorrow, the vaccine mandate for truckers in the US begins. The Canadian border is already affected by the Canada mandate and there is already some pain. Truckers work alone although a small number share driving with wives or other partners. Their exposure to the general public is minimal in their work life. The same mandate by the US will block most Mexican drivers from bringing fresh fruits and vegetables into the US. All three groups of drivers have a low compliance with vaccination. The result will likely contribute to the supply chain crisis, which has only worsened the past few months.

Energy policy has driven up oil, fuel, packaging and gas prices. Transportation costs have skyrocketed. Emission regulations have driven up port costs and delayed transportation; fracturing the supply chain. Vaccine mandates have hit the manufacturing and processing sectors. Legislative policy and COVID spending have artificially inflated the economy. Monetary policy has devalued the dollar and driven even higher inflation.

Into this hurricane of stagflation, the fed is going to raise interest rates. The stock market could lose half its inflated value. The NASDAQ is already responding to the storm clouds. Employment is going to start getting really sketchy. Congress will eventually announce their remedy, which will be more spending – and the dollar gets worse.

A market expert is predicting a bear market.

I read this book this week and found a good book review in “City Journal,” titled “Three Blind Mice.” Atlas began as an academic neuroradiologist and then transitioned to a 15 year career as a health policy researcher. I did something similar when I was forced to retire at age 55 with an old back injury. I spent a year at Dartmouth learning methodology and biostatistics. I don’t know enough about Atlas’ story to know if he did something similar. Quite a few academic physicians have done similar transitions, especially as they get older.

In Atlas’ case, once he was recognized by the Media, he was immediately denigrated as “a radiologist.” He was also labelled as “not an epidemiologist.” It did not matter that none of the other three MDs on the Task Force was an epidemiologist, either. Atlas was in contact with many epidemiologists who were feeding him data and statistics.

He found the “Three Blind Mice” of Birx, Fauci and Redfield were uninterested in data or the scientific publications he kept bringing to the meetings. Eventually, he gave up going to the meetings. He found Trump receptive and he agreed with Atlas’ program of protecting the high risk population, especially nursing home residents, plus others with pre-existing conditions, one of which has turned out to be obesity. He blames Trump and his team for being afraid to sack Birx who was the one telling all the Governors to lock down their states. As he says in conclusion, “It didn’t matter. They still lost the election.” They feared a firestorm in the press if she was demoted.

Atlas was in despair as they continued to emphasize testing the asymptomatic and neglect the nursing homes where almost 50% of the deaths occurred. The psychological and economic damage from the lockdowns may last for years. Masks are useless and he quotes many studies to prove it. The one study quoted by Birx all along was based on two beauty parlor employees. That was it.

In the end, he quit after the election although Trump wanted him to stay. He continued to communicate by email. He describes the insane abuse he took from the Media and may spend a little too much time on it in the book. Some professors at Stanford (not the epidemiologists) sent out an email letter attacking him for working with Trump.

He has one section about Florida Governor DeSantis who, he writes, was already familiar with the literature and who implemented most of Atlas’ policies on his own. I remember the Media attacking DeSantis when he set up treatment facilities at a large retirement community, accusing him of treating supporters first. He was following the science they ignored in their identity politics frenzy. Florida could have been as big a disaster as New York with their huge senior population. The fact that DeSantis followed the science and not the Media prevented that outcome.

Other books are beginning to come out now but this one seems authentic by an insider. Here is the book at Amazon. I read the Kindle version. The hardcover came out a few days later.