When I first started getting into the utility business I remember that I was on an airplane traveling to a client in another city when I started talking with a woman yesterday who had a young son. She asked what I did for a living and I said that I worked with utilities. Her son piped up “Are you the man who turns off the power?” and that killed the conversation (mom was embarrassed and I learned to be careful about too much information).

One of the different elements about utilities is that they serve all customers. Since utilities are a “natural monopoly” (meaning that it doesn’t make sense to have two companies stringing up electric poles side by side) the flip side of giving them monopoly rights is that they must provide for all the customers in their “service territory”. While most of the readers of this blog probably never interact with the utility company unless they move or have an outage, utilities spend a significant amount of time and money on collections and turn-on, turn-off activities for poorer customers. Each of these events is preceded by multiple calls, collection attempts, and then physical visits, none of which make money for the utility.

While a lot of this made sense when utilities were regulated monopolies, now many regions have significantly “de-regulated”, which mainly means that the generators of power are free to charge what they want and the local utility makes its money by passing on power costs and charging more for their profits. In the case of Illinois, where Exelon provides (most of) the power and then their fully-owned subsidiary Commonwealth Edison provides power to residents (and complains about the high cost of power that it passes on), no one is shedding tears for Exelon. However, in other areas where the generation and distribution companies are actually separate, you need to start thinking harder about the cost of poorer residents in your service territory. 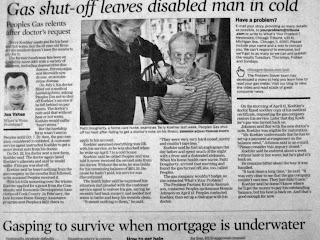 This article describes the (sad) case of a disabled resident in Bronzeville (a less affluent area in Chicago) who is complaining to the Chicago Tribune that the local gas utility won’t turn on the fuel in an article titled “Gas Shut-off Leaves Disabled Man in the Cold“. In the article, the man hasn’t paid his bill, so the utility comes and turns off his service in April, and the man is angry and complains to the newspaper.

In fact, this was my understanding of how it was supposed to work – the utility can’t turn off your heat in the winter, so they wait until spring and demand repayment, and if you can’t pay, your heat is turned off. In many instances people try to get around this by registering under another name, moving, etc… but this guy just complained to the paper and his gas was turned back on. From the article:

“It took them a long time”, he said, “It was very clear to me that the gas company couldn’t care less. They just don’t care.”
He said he doesn’t know where he’ll get the money to pay his outstanding balance, but his heat is back on. And that’s good enough for now.

In true lazy journalism style, the article ends there. But why didn’t the journalist ask some deeper questions?

WHY are utilities forced to provide services to customers who 1) haven’t paid 2) have made clear that they have no intention of paying?

Go to the poorer neighborhoods; there are no grocery stores, no local services, nothing, except liquor stores, convenience stores and gas stations. Why don’t we force large retailers or grocery stores to do business in that area, with customers who are promising not to pay? Because it is absurd… you can’t make a business go into an area where it is guaranteed to lose money, correct?

And yet for utilities, we still haven’t fully grasped the “flip side” of deregulation; who is going to pay for the poor, and are we going to give services to those that can’t pay (and burden everyone else’s bills as a result) indefinitely? Is this a new “right”, that can’t be taken away? If so, we are going about this in a lousy manner – the same houses that the poor are likely to live in have poor insulation (ever hear of a landlord investing for the poor) and the utility has an expensive method of nagging and then sending someone to turn off the power, and then back on.

These aren’t flippant questions, even though the journalist who wrote this article didn’t understand that at all.

If one played this out to a logical conclusion, the local utility would want to “spin off” poorer neighborhoods that are less profitable unless they can pass these costs on to other customers (through rate regulation). In fact, it could make sense to PAY someone to take a service territory filled with poor customers off your hands.

Some day we will need to face up to these questions when utilities are fully deregulated and power is scarce and costly. For now, the reduced price of natural gas and a fall in demand caused by “the Great Recession” has limited our problems; but they will come back with a vengeance later.

10 thoughts on “Utility Regulation & The Poor”