Recently I went on a River North architecture tour in Chicago.  The tour was sponsored by the Chicago Architecture Foundation and cost $15 / each for non-members, which was money well spent.  Here is a link to the tour. 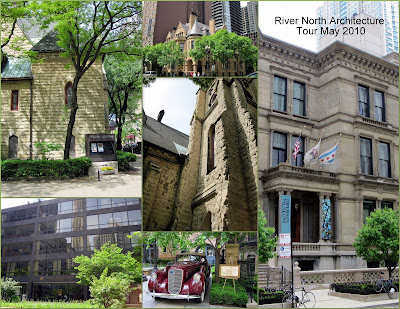 The tour started near St. James cathedral at Rush and Huron (upper right, photo).  This church was constructed right before the Great Chicago Fire of 1871.  The center, middle photo shows the tower on the right that survived the fire; you can see the damage to the stones.  On the lower left you can see the Episcopal center for the St. James cathedral built in a modernist style; this was almost torn down during the great real estate boom but it survived and now is probably safe for a few years since construction has come to a standstill.  Driehaus Capital Management helped greatly with the neighborhood, and the top photo shows their headquarters.  The bottom center photo is a classic car in their courtyard and the Driehaus museum features a prominent building from an early baron with immense stone walls in an attempt to make it fireproof. 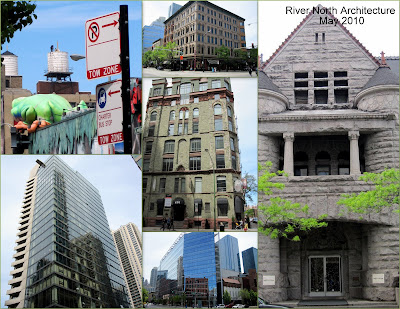 The upper left shows one of the classic water towers designed to fight fires; they are working on it with the awful frog from the Rainforest Cafe roof in front.  The top building houses Maggianos in River North, which was one of the first restaurant / building uses in the neighborhood, designed to attract people into the neighborhood when it was frankly skid row.  The developer who did this, Friedman Properties, owns a vast number of buildings in the neighborhood and was instrumental in building it up.  I recommend going to the company web site where they have a company newsletter on all the changes in the area and an interview with the founder.  Other buildings of note include one with odd green stone, the Dana Hotel (on the lower left) with the modernist front and exposed concrete back (note the “diving board” on the top, too); that cool triangular building in the lower middle, and the Excalibur nightclub which used to house the historical society on the lower left (the first one burned down, so they tried to make it fireproof). 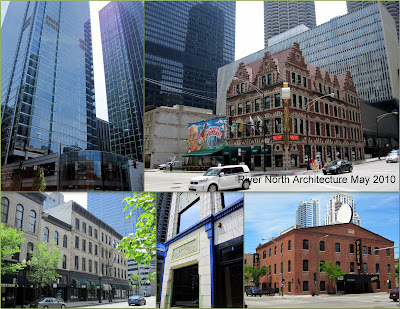 On the upper left you can see the brand new Friedman Property at 353 N Clark, home to lots of law firms and the like.  The famous Harry Caray’s building used to be a varnish company, and has very distinctive architecture dating from the late 1800’s.  The block on the lower left is all buildings from the late 1890’s from famous architects, none of which are protected.  The lower, center picture is from the bar English, which has a unique Art Deco front in splashy colors which is very rare in Chicago – it also dates from the late 1890’s when apparently they widened LaSalle street.  This building is protected and it is a bustling bar.  On the lower right is the Powerhouse, which used to house cable cars and horses, but is now another night club. 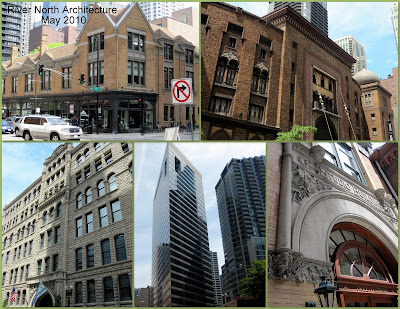 Moving towards the lake, you can see the famous Tree Studios (upper left) which were dedicated to the artists and in the lower right you can see the entrance, with a face of the judge who funded the original building above the door.  In the lower middle is the famous AMA building, with the cut out.  Per the tour the AMA used to own lots of land in River North and when it started getting bad in the 1950’s and 1960’s their idea of urban renewal was to tear down the older buildings and leave a parking lot; apparently they became one of the biggest land owners during the era due to that strategy.  On the lower left you can see the Court House building, which used to house the Chicago courts, but was turned by Friedman Properties into a building for lawyers and small businesses in the creative arts.  The Medinah Temple is on the upper right, which was turned into a Bloomingdales home business, and it is highly recommended that you walk around in there if you are touring Chicago.