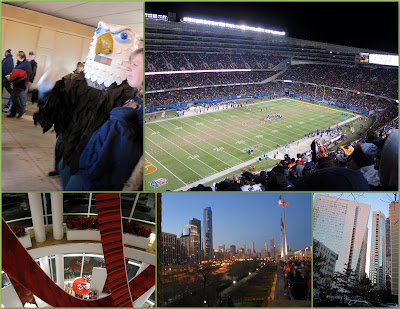 Upper left – a crazy guy dressed as an Eagle for the Bears vs. Philadelphia game on Sunday night.  The Eagles fans were not shy about taunting Bears fans even when outnumbered 100-1 I questioned their sanity.  Upper right – the view from the “cheap seats” at the non-PSL seats at the Bears game where Dan and I reside.  Lower left – a view from the escalator at the Crate and Barrel store on Michigan avenue… as a kid I used to hate going there.  Lower middle – a view looking north on Lake Shore drive at half time at the Bears game from “the columns” at Soldier Field, probably near the time when that guy jumped out of the stadium and died.  Lower right – the ever-photogenic Sofitel hotel in the Viagra Triangle.  If you like more (funny) Bears stuff (not the part about the fan dying, that is sad) be sure to check out the “most important site on the Internet” Drunk Bear Fans where there is plenty more where that came from.