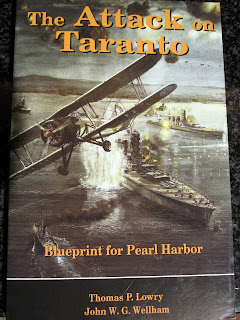 As history buffs know prior to the Japanese attack on Pearl Harbor the British attacked the Italian fleet at their forward base in Taranto in 1940, sinking one battleship and severely damaging two others.  While the other two battleships were later repaired, the real impact was that the major Italian warships were withdrawn from the forward base at Taranto where they severely threatened Allied convoys to Malta to bases further up the peninsula where they were less of an immediate threat.

The book “The Attack on Taranto

” (Blueprint for Pearl Harbor) is by Thomas Lowry and John Wellham and is highly recommended for anyone wanting to learn more about this gallant attack by British naval pilots in their slow and elderly (yet still effective) Swordfish aircraft.  While there are significant differences between the attack on Pearl Harbor and the British attack at Taranto (notably that Britain and Italy were already at war when the attack occurred), this type of attack should have put the Americans on higher alert and was studied by the Japanese in their plans for the Pearl Harbor attack.  In any case I highly recommend the book, especially for history buffs.

5 thoughts on “The Attack on Taranto”