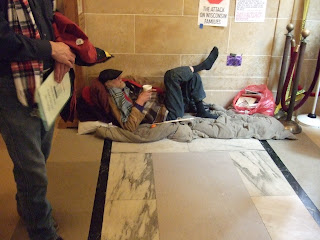 Click for larger, from last Saturday. No more sleepovers in the capitol though. I plan on heading down there today once again to see what is what. The protests this week have been pretty much dead, but I assume there will be more activity down there on the weekend. I demand a giant papier mache head!