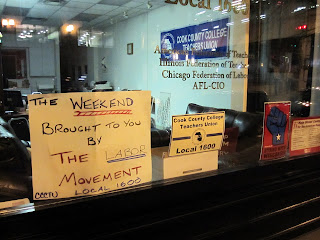 Sigh – compared to Indiana and Wisconsin where the legislators are “on the run”, in Chicago and Illinois it is just the usual “tax and spend”. Unions here don’t have to worry about any pesky regulations or laws that might limit their behavior because they own the city and the state and can pretty much do as they please. I’m sure that has nothing to do with the fact that Illinois has among the most under-funded pensions in the US and that our governor is making noise about having the Federal government backstop our pension obligations, as you can see here:

Gov. Pat Quinn included the backstop proposal in the 2012 state budget he released last week. Critics said it would amount to a federal bailout of underfunded state pension programs and pronounced it dead on arrival in Washington. “Hell no–not happenin’,” a House Republican aide said.

But one expert said policymakers could consider the idea in the future, as states lobby Congress and the White House for help in tackling their growing pension obligations. A federal guarantee would allow Illinois and other states with fiscal problems to sell pension bonds at lower interest rates.

While the Federal government backstop of state pension debt went nowhere, it clearly is a strategy that will be tested at some point in the future, since Illinois has not implemented any of the policy changes necessary to sufficiently fund our obligations or reduce future requirements. Our unions will be on the vanguard of bankrupting Illinois to the point where there is no choice but to apply for Federal aid while the state is flat on our back.

6 thoughts on “Chicago And Illinois – Home of the Unions”