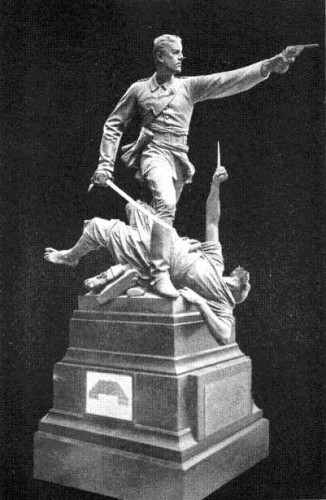 Over six feet in height, splendidly made, lithe and strong, with all the activity of youth, expert with sword and pistol, he was a noble specimen of the British officer, and none more fit than he to stand in the deadly breach. Out then they went and acted on the plan arranged. For a third time those fateful guns were captured, and then alone to stem the fierce assault stood Hamilton, while his men laboured at the gun; but the odds were too great, and the gallant subaltern, after killing three men with his pistol and cutting down two more with his sword, was himself borne down. And so fighting died as brave a young heart as ever did honour to the uniform he wore. Swarming over his body, the mutineers recaptured the gun and again drove back the remnants of the forlorn hope. Hamilton lay where he fell close to the gun, till darkening night settled down on the dreadful scene. But when, next morning, a witness passed that way, he mentions that the brave young fellow’s body was laid across the gun. Perchance it was the kindly act of a friend, or perchance the rough chivalry of one who had watched his heroic deeds.

According to the book Pictures of Ireland: “While all the victims resisted gallantly, the defense of Lieut. Hamilton was most conspicuous, and the Afghans, to this day, remember the daring soldier with the respect which dauntless bravery begets in the savage breast.” I am not sure when that was written, but I trust that the savage Afghan breast no longer holds a place for Lieut. Hamilton, if it ever did.

This site contains a list of all of the officers and troops killed in defence of the Residency, from the British resident himself, Major Sir Pierre Louis Napoleon Cavagnari, KCB, C.S.I., Bengal Staff Corps all the way to 3rd Class Hospital Assistant Rahman Bakhsh. I won’t say “down to” for Cavagnari and Baksh were brought level by death.

The heroic defense of the Kabul residency inspired the construction of a “Memorial Arch And Tank To The Memory Of Sir Louis Cavignari And The Officers And Non-commissioned Officers And Men Of The Guides Killed In The Defence Of The Kabul Residency, September 3, 1879.” 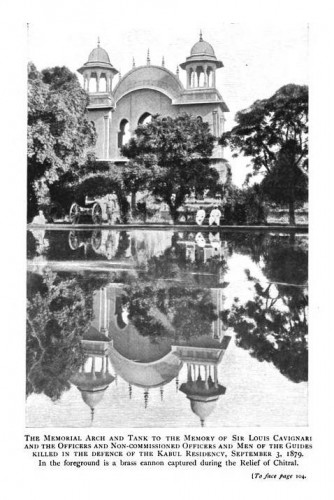 The Memorial was erected on the grounds of the Guides barracks, located in what is now Mardan, Pakistan. What started as a group of tents in the midst of a howling wilderness had become a rather lavish set of accomodations, as described by Younghusband in Chapter XIV, The Home of the Guides.

When the Guides about the middle of the last century first pitched their wandering tents in the plains of Yusafzai they were only birds of passage, in hot pursuit of some band of marauders, or swiftly marching to surprise a distant stronghold. But as the border became more settled, and sudden movements were less seldom called for, a position was chosen within striking distance of all the centres of disturbance. And thus came to be selected the site of the little cantonment, which since has sent forth generations of steel-bred warriors to keep bright the ancient flame; a small oasis, rescued by rough but kindly hands from the dry and desolate desert, and which the leisure of sixty years has served to turn into the beautiful and cherished home of the Guides.

The mess stands in a five-acre garden, which has been the joy of many generations; for, apart from its abundant fertility, amidst its shades are to be found a swimming-bath and racquet-court, as well as tennis, badminton, and croquet lawns. Oranges, strawberries, peaches, plums, apricots, grapes, loquats and other fruits flourish and abound, while nearly every species of English flower and vegetable grows strong and well. Great trees give shade and peace to the place. But perhaps the greatest attraction to the hot and weary officer, and which leaves the most grateful memory with the dusky warriors who march through in war and peace, is the deep cool swimming-bath alongside which under the trees is spread a breakfast that suits the hour and climate. There are perhaps few more grateful feelings than on a summer’s morning to come out of the fierce heat and dust and glare of field-exercises, or a march from the Malakand or Nowshera, and to find oneself in these cool and comforting surroundings.

Alas, the memorial has fallen into disrepair, according to what appears to be the official city of Mardan site. I sent a note to the Mardan site, suggesting that they contact the Pakistani Army’s Frontier Force Regiment, which is a lineal descendent of the Guides, and the memorial is therefore part of their heritage. Perhaps the Piffers could pitch in to maintain the site?

But in a very poor and very corrupt country like Pakistan, odds are it will just slowly fall apart.