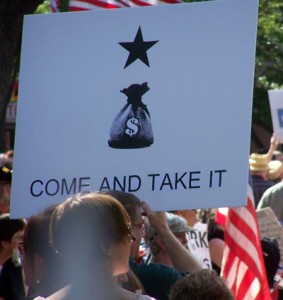 In the spring of 2009, I was asked by an old military blog-friend, a retired Air Force officer, if I would join his local Tea Party Committee to plan the Tax Day protest. We all assumed at that point that we would have an event involving five or six hundred people; with luck, we might even nab of bit of attention from our local media. We’d do it in a park someplace, listen to some speeches – and hey, I was a former broadcaster, and he knew that I could write, and could I come along to write news releases?  Pretty please? S’help me, that’s all that I thought it would be, and it would have been, save for a series of fortunate involvement by people who had bigger ideas and useful connections. So, our simple, humble home-made Tax Day 2009 Tea Party protest turned into a massive blow-out in Alamo Plaza, an all-day and into the evening extravaganza with Ted Nugent, at least 15,000 people from all over Texas and the United States, and Glenn Beck – of whom at that point I had never heard. (Candidly, I had him mixed up with Jeff Beck and thought; oh, cool – another conservative rock musician besides Ted Nugent.)

That rally, and others across the United 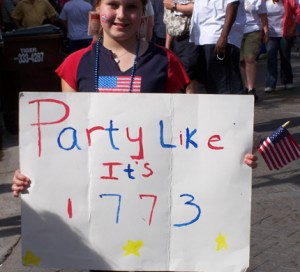 States on that day helped launch a movement of heretofore relatively uninvolved people, who had for various reasons mostly to do with economic issues developed a sudden intense interest in government fiscal responsibility, an appreciation for a fairly strict interpretation of the Constitution, and a sense of total disillusion with our currently elected political class. Much to the surprise and horror of established politicians and the mainstream media, the Tea Party didn’t fade away after a protest or two, and Tea Party activists have continued protesting, rebelling, educating themselves and preparing to take over the star-making machinery behind the GOP.

At that time, in early 2009, I had just published the Adelsverein Trilogy – the SATP committee even presented a set to Glenn Beck, as a token of our appreciation and signed with all of our names. In writing the Trilogy, I only briefly touched on the Texas War for Independence; the Goliad Massacre figured highly in the first chapter, the Alamo hardly at all. But when I came to do my next book, I was struck with the notion of doing a story which would follow a woman’s life, through the days of the entrepreneurs – of Stephen Austin’s Old 300, and Green DeWitt’s Gonzales settlement, through the buildup to the war, and the decade of the Republic of Texas. Drama guaranteed, even if I preferred to give attention to practically everything but the siege of the Alamo. So, get out the books and begin a serious study of the build-up to Texas’s rebellion against Mexico  . . .  and as I read, it began to seem somewhat familiar.

Not an exact parallel to the rise of the Tea Party; just something of the same sturdy and independent mind-set of Tea Partiers and the long-ago ‘War Party’ of Anglo-Texian settlers. They had counseled rebellion against Mexico, in response to the ongoing conflict between local and national authority – sometimes intemperate, hot-headed, irrepressible – and in the light of subsequent events, correct. To me there seemed to be something of the same unhappiness and resentment with a distant, unaccountable and dictatorial central authority  . . .  and a response from that central authority which only fanned resentment, followed by disaffection and resistance. Historically, this was just a small piece of a larger conflict within Mexico; Texas was not the only state to rebel. Revolt came over upholding the Constitution; the Mexican Constitution of 1824 in defiance of a self-appointed dictator  . . .  and that was where the siege of the Alamo all began, like a trail of gun-powder that fizzled and snapped away, until it finally reached the magazine and exploded into conflict.

For brief shining moment upon winning independence from Spain, it appeared that Mexico – with a Constitution modeled after that of the United States – would evolve into a similar nation; fairly autonomous states, a Congress, and a central federal authority administering with a light hand. Two parties evolved, with differing concepts of how matters of governance should be conducted within Mexico: The politically liberal (in the old sense of the word) Federalists, who favored the model of the United States, and the Centralists – the conservative (in the old sense) ruling classes; essentially a dispute between two mind-sets regarding civil authority and the proper involvement of ordinary citizens in the exercise of it. The Centralists favored central, top-down authority by well-established and ordained elites. Those lower orders did as they were ordered by their betters – and no back-talk allowed. The Federalist position – which naturally and organically was that held by the Anglo-Texian communities (although they were far from being unique in this) had no truck or toleration for political elites, practically no stomach for doing as they were ordered, and felt they had a perfect right to concern themselves with the running of their communities.

Outlaying states – which Coahuila y Tejas certainly was in the 1820s – had become accustomed to managing their own affairs during a period of benign neglect from governmental authorities in Mexico City. The Anglo settlers in Texas had been brought in by generous offers of land and consideration by a Spanish/Mexican government desirous of establishing a buffer against France, the United States and the ever-ready-to-raid Comanche. They had approved or confirmed entrepreneur contracts for Stephen Austin and others, of which Green DeWitt became the only fairly successful Anglo examples. For nearly a decade, all seemed to work fairly well. Many of the long-time Anglo settlers were men of substance, who initially did well out of the generous policies regarding Anglo-American settlers; they did not want to put all that at risk. They had well established properties and businesses, with hopes of doing even better as citizens of a Mexico which followed the American model. A fair number of them married into the Tejano elite, as did James Bowie, John William Smith who would be a mayor of San Antonio, and Sam Houston’s eventual captain of scouts, Erastus “Deaf” Smith. They straddled two worlds and had found honor, home, a living and a family in both. Such men were not easily goaded into rebellion.

In 1835, the newly-elected President of Mexico, Antonio Lopez de Santa Anna, a military hero of established repute and competence, had long been considered a stalwart Federalist, and friend to the Anglo-Texans. He was viewed by some as the George Washington of Mexico – until he revealed his true colors. His sudden volte-face involved establishing tight central authority, revoking liberal reforms, dissolving the Congress, and establishing a dictatorship backed by armed force. Antonio Lopez de Santa Anna would haunt Mexico for rather longer than he haunted Texas – the strong ruler, cynical and ruthless. He would be the bad boyfriend to which Mexico would return, ever and again in time of trouble. Federalist resistance to his central government sprang up almost immediately, especially in the outlying regions and in Texas, where the stubborn insistence of the Anglo-Texians in managing their own affairs had always appeared as the rankest kind of sedition to top-down administrators in Mexico City. Perceiving more sedition and revolution than may actually have existed among the Anglo-Texians as a whole, they attempted to quash it firmly over the early 1830s, but the more effort put into re-establishing control over distant American colonies in Texas,  the greater resentment and suspicion grew among the Texians –  which resulted in more meetings, fiery letters and editorials, stronger determination to manage their affairs themselves – a self-fulfilling prophecy as far as the Centralists were concerned.

No, not an exact parallel, the clash between mid-19th century Federalists and Centralist factions of Mexico, and the concerns of the 21st century Tea Party with regard to our federal establishment. But what stood out for me, in a very stark way, was how the Texians lined up, as proud and prickly individualists, completely confident and comfortable in looking to themselves and their communities as the ultimate authority for making decisions about their own governance. In the words of one Texian rebel “We are all our own captains with our own ideas.”  Just so did the Tea Party draw in people who had not before been politically involved, rekindling an awareness of the responsibility of citizens to be informed and involved – and instilling the confidence to act politically on those beliefs.

(More about the early days in Texas and the build-up to the Texian revolt is here at my wordpress blog: A Day at Old La Bahia, A Man of Convienient and Elastic Virtue, and An Old Mission Church Half Tumbled Down.)

10 thoughts on “Tea for Texas”