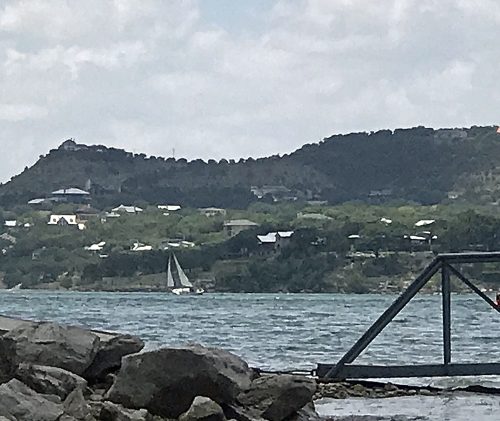 It was a lovely day – we got there early, so as to be assured of a place to set out the umbrella and the blanket. We expected to beat a large crowd, which never really materialized. There were mostly families, setting up on the beach, or on the levels above the little cove, children and their parents, splashing about in the shallow water. The day pass is only good up until 6 PM, which probably cuts down on the rowdiness. The Air Force and the Army recreation services have a slice of recreation area on Canyon Lake, which is a short drive from San Antonio. The recreation area encompasses a small beach with picnic grounds adjacent, a dock and anchorage for small boats, rental cabins and cottages and RV spaces. Next year, we are thinking of renting one of the cottages for the 4th. Depends on how everything goes. We hope that things will go on in the Shire, as they always have, from day to day.

I swear, I have never been able to understand how the loud and proud Capital-F official feminists made the ready availability of abortion the hill (for the pre-born fetal humans, mostly) to die on. Yes, I’ve pondered this in blogposts many a time. The 19th century suffragettes certainly were what we would now cast as pro-life, and so was a modern iteration, IIRC. (I used to get their newsletter.) Why that one single aspect, out of all the others which would have a bearing on the lives of females; extended maternal leave and benefits, quality childcare … practically any other concern other than that of abortion on demand at any stage of pregnancy could be a rallying ground for those affecting an intense interest in matters of a particularly female orientation. This, when birth control in so many forms (and for male and female alike) is readily and economically available. This is not the 19th century anymore, not even the first half of the 20th,. Truly, it is a mystery why this particular cause and no other animates the radical fem-fringe. I can only surmise that many of the radical and early feminists had abortions, felt horrifically guilty about it all and wished to drag other women into that particular hell with them as a matter of solidarity.

Once upon a time in the mad 60’s a pair of mad lefty (but I repeat myself) socialist sociologists refined a strategy for bringing about the blessed socialist utopia by overloading and bankrupting the welfare system. This, they confidently hoped, would crash the capitalist system and bring about the longed-for socialist utopia. Essentially, they drafted the poor and unprivileged into an army demanding services which the state ultimately could not provide; somehow, this would crash the system and bring about radical social reform. The whole thing sounds rather like the Underpants Gnomes theory of economics or the cartoon showing a pair of white-coated scientists examining a complicated mathematical sequence on a chalkboard with a notation in the middle of it which says, “And here a miracle happens.”

Put me down firmly on the side of those who see “You’ll own nothing and you’ll be happy” as more of a threat; I see “You will be happy” with special emphasis on “will” and the unstated addendum to that statement as “You damn peasants better be happy, or else!”
The simple fact is that owning things – especially things which can be construed as tools – allow one a degree of independence, and even a mild degree of comfort over and above the norm. This was suggested to me in a college class four decades and more since. I think it must have been the required readings for medieval history course; dedicated medievalists had gone into various probate records and wills in England or France and studied the inventories of barely-above-survival peasant households. Nothing really notable in the main – just basic tools, household and farm implements like butter churns, cheese presses, cooking pots, some simple furniture. But at least one of the readings pointed out how possession of certain tools like a cheese-press, hinted that the owner of that item –was in fact, making cheese, possibly for their own use or for the market. The very fact that they owned something with which to turn a farm product like milk, into something to sell or barter for in the marketplace implied a slightly higher level of comfort and security for that household.

The post at Legal Insurrection (link) says in part, that the goal is to “…to equalize test scores among racial groups, OPRF will order its teachers to exclude from their grading assessments variables it says disproportionally hurt the grades of black students. They can no longer be docked for missing class, misbehaving in school or failing to turn in their assignments, according to the plan.”
So basically, this is an administrative rubber-stamping a passing grade on the report cards of black students who can’t be arsed to attend class, behave properly as students when they do, or turn in required assignments. Frankly, one wonders why such students even bother with school anyway, if they are so vehemently disinclined towards the life intellectual, but truant law and free daycare for such parental units as they have probably account for it, as well as money for butts in seats on the part of the school itself. At this rate of scholastic malpractice, urban schools might just as well hand out high school graduation certificates as if they were Pokemon cards, one to a customer and save themselves time and effort in the classroom. Any serious education of pupils appears as merely a happy afterthought to a means of employing large numbers of administrators, assistant principals and teachers whose union membership is vastly more important to the powers that be than imparting knowledge to that handful of rare-as-hen’s-teeth pupils who seriously want to learn.