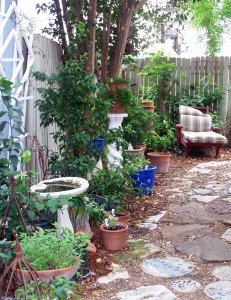 One of the best things about buying a house and retiring from the military was being able to feel free to actually get serious about a garden. I went through a phase of planting roses – many of which have thrived and survived – and a long project to rip out the existing lawn, back and front, and put in xerioscape plants. The back yard was the place that I put the most into, though. Because of the layout of the rooms and the windows in them, the back was the part I looked at the most. And because of the peculiar soil composition – a foot or so of heavy, dense clay laid down over an impermeable layer of caliche which apparently goes all the way to the core of the earth – getting certain things to thrive and grow in it has been a challenge. Really, if I had known then what I do now, I would have hired someone to come in with a bulldozer, scrape up all the topsoil and replace it with Miracle-gro. But I made do with putting a lot of things in pots, and I had quite a nice little garden going, until a pair of disasters. The first were the two rambunctious young dogs that my daughter fostered for a couple of months. They were whirling balls of destruction … and by the time we found permanent homes for them, they uprooted half a dozen of the potted and planted specimens and dug holes everywhere. Then a hard and prolonged freeze in January, 2010 pretty well finished off everything else.
Beginning last spring, I had to start pretty much from scratch, at least as far as the potted plants were concerned. Bit by bit, half a dozen at a time; a trek up to Wimberley for Market Days, and to the San Antonio Herb Market to replace the exotics and the herbs, a start on filling the dozens and dozens of empty pots. Late last spring, my daughter bought a number of topsy-turvy tomato and pepper planters, marked very well down at the grocery store. I had never had much luck growing tomatoes in San Antonio; really, sometimes it seemed like it was a curse or something. But they grew well in the topsy-turvys last year … so this year, we planted them all again. We had an idea, from seeing one in a neighbor’s yard, to build a frame so as to hang a row of them from branches of the big mulberry tree that shades half of the back yard. The frame is two lengths of 2×4, one below the other and connected by chains, and hanging from another set of chains, suspended between two high branches. 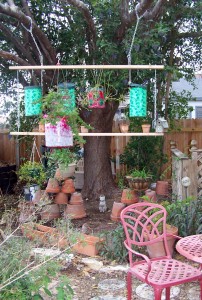 Then, there were the three earth-box planters that we found, put out for the trash. Apparently, they are supposed to be the absolute bee’s knees when it comes to growing veggies. We hauled them home, looked up the instruction manual on line, and now two of them are full of tomatoes and the third with zucchini and cucumbers. I also had one of those special pots for growing strawberries – with seven or eight little openings along the sides, which never grew strawberries or much of anything very well, as the soil leaked out before the roots of the plants grew enough to stabilize it all. We had the notion to plant it with various kinds of mint – which grows like a weed anyway – and cut bits of coir to put around the base of each plant to keep the soil in place. This looks to be working well; this week, we can hardly see the sides of the pot for all the mint.
I also had a number of long rectangular pots – now they are filled with thriving lettuce and salad greens. It would be fantastic to keep salad greens going for as long as possible: nothing beats the taste of fresh-picked greens. The long planters and the earth-boxes are mostly arranged on the ground underneath the hanging frame, so that they can all be watered at once, and water overflowing from the uppermost will drip down on the lower. 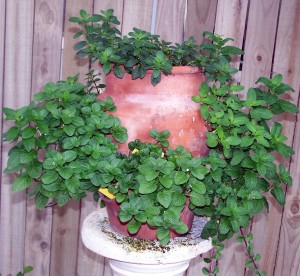 A couple of weeks ago, one of our neighbors were having some trees heavily trimmed. Out in front of the house, there was one of those wood-chippers and a small covered truck to haul the chipped wood in – and we got the attention of the crew boss and asked if they would give us some mulch. He said sure – but warned us that the stuff came off the back of the truck two or three cubic yards at a time. Were we sure we wanted that much? Oh, yes we were. There was a veritable Matterhorn of finely-chopped fresh wood mulch in our driveway by that afternoon. We could have used even more, but my daughter said flatly that her back couldn’t have handled another couple of wheel-barrow loads. Just about every one of the planting beds, front and back, is now covered with three or four inches of mulch, and looks a thousand times better than it did after the dogs and the frost got done with everything. 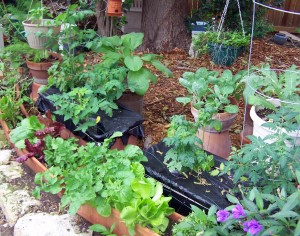 In one big empty patch, where I used to have a cluster of potted plants, I decided that I wanted a mixture of salvia – which does thrive in clay soil, fortunately – and some artichokes, which are only a species of thistle. How hard could it be? I love artichokes, and being able to pick them fresh from the garden would be fantastic. So – a little salvia there, some artichokes, cardoon and lambs’ ear there … and maybe at last I can fill in that bare patch. The surviving roses – which were all from the Antique Rose Emporium outlet, are heavy with clusters of buds. We might even have something spectacular from the roses at last.
And just this very morning, we were talking about building a raised bed from the treated timbers intended to construct decks with. It wouldn’t be very hard at all, to build one to fit into the back corner of the yard which is so full of little bits of brick and concrete rubble left from constructing the house that I have despaired of getting anything to grow there. Something long and relatively narrow, rather like the earth-boxes, but several times bigger, something that we could even cover with a plastic sheet in the winter, to keep stuff going … now, that will have to wait for another year. Right now, I’ve got the place back to where I enjoy looking at it, again. 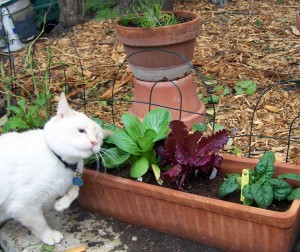 4 thoughts on “Reviving the Garden”