Disruptions often occur because businesses confuse their original mission with their current configuration. A great example is newspapers – while newspapers held the banner of “journalistic integrity”, they made their fortunes on the fact that for decades they held a de-facto monopoly on advertisers in their home markets. If you wanted to reach the whole town, you had to put it in the local paper, and this was the engine for their growth and profits. As there started to be many more ways to reach the city (from local TV ads to the internet, etc…) and the monopoly eroded, the “tide went out” on their journalism model because no one was really paying for that, it was just a free ride atop the advertising. This was brought home to me when someone I know left working for a local newspaper in a midwestern city and started working for a non-profit; she noticed instantly how much more polite they were even when rejecting her requests for business; they truly hated the monopoly newspaper and their bile was due to that relationship. And of course the evidence for newspapers’ abject decline is visible in the bankruptcy and stock prices of the remaining entities.

Cellular phone companies, too, are falling into this trap. Companies like Verizon provide a wireless network, and specialized companies like Motorola provided the phones. Between the network providers and the hardware providers, they thought that they owned the experience and would be able to capture large profits in the future. Today, other than when the situation is dire (AT&T), consumers are caring less and less about the particular phone network they use and the hardware, too, is going behind the scenes, as they care about the particular applications on their mobile devices. Apple and its brilliant iPhone took the profits from the network providers, who now are scrambling to hold customers and long-term contracts. And the iPhone itself over time will come under immense pressure on their long term profits as new entrants with similar functionality and access to applications can come in and bring commodity tools to the market efficiently. Originally the phone companies (AT&T, Sprint) and the hardware manufacturers (Motorola, Nokia, Blackberry) thought that they could control the network, user interface, and the content. While Apple is thriving against the new competition (for now) this entire “ecosystem” has not played out in the way it seemed a decade ago, and many of those that expected to capture above-average profits are now either commodity players (hardware) or struggling to keep up with capacity while not being able to leverage this spend into a long term guaranteed return (the cellular network providers). The value is going to those that can “monetize” the mobile advertising experience, which probably will be a group of software(Google) and social networking companies (Facebook).

Now we move onto cable. Cable existed as a foil to over-the-air television, an oligopoly like newspapers that bled its mission white until powerful intruders came and up-ended their business model. Cable started to buy content, and they built a parallel distribution network at huge cost to compete with what was available, for free, over the air. Cable today also is the primary mechanism for broadband internet service, which it links with its paid content (and a bit of phone), to charge large and growing fees.

This article at Bloomberg is titled “The Cable Industry Isn’t Stupid, Right?”

The NPD Group put out a survey on Tuesday that suggested monthly pay-TV rates could reach $200 by 2020, up from the current average rate of $86. The analysts at NPD credit rising content-licensing fees and the average 6 percent rate increase that cable companies jam down users’ throats each year.

This is where the dis-aggregation of cable into 1) network provider (one amongst many) and 2) content provider becomes important.

I recently bought my parents a ROKU 2S box. The box is amazingly small, about the size of a mobile phone and a bit thicker. We plugged it in to an HDMI port on their TV and I connected it up to their wireless network (they have cable) and the software updated and the Roku box was working. In the picture below you can barely make out the small box to the right of the front channel speaker. 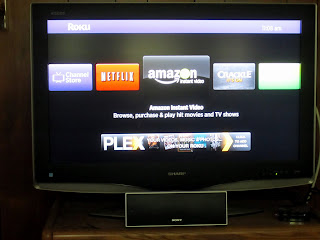 The Roku menu is very simple, as is the remote. There are a few channels pre-populated, and then you can pick other channels out of the list. The most popular are Amazon, Netflix, and Hulu, although there are many others (dozens or hundreds to choose from). Amazon was most interesting to me because I have “Amazon Prime”, and with Amazon Prime I get free “Instant Videos” through devices like Roku or any other Blue Ray DVD player like my Sony (see here) that has internet access. There are a vast array of movies you’d actually want to watch through Amazon prime, and the streaming worked fine (their connection was about 2MB up or down in the TV Room). Streaming HD at that rate might be a bit choppy but we didn’t notice it in the limited time I worked with it (at home I am able to stream 10MB through my Sony DVD player and it works great). You also can watch myriad TV series only available on cable, so my parents hopefully will like some of these. Today their TV is provided over the air and they like to watch network shows and also a lot of the BBC English TV which is provided over our local PBS channel (4 in fact, for Chicago). HBO GO is another fantastic channel, but I use Direct TV and HBO GO apparently hasn’t struck a deal with Direct TV yet – when they do I will be sure to program that in for my parents, as well. From my perspective this isn’t stealing because I am paying for HBO and Amazon Prime today and my parents are part of my family and each services allow a few devices on each service (not sure about HBO GO, but Amazon Prime allows 2 at a time).

The Roku box and interface is amazingly simple. The founder of Roku is Anthony Wood, who also invented the DVR (Tivo). In this article Mr. Wood discusses his goal:

Wood said the future of TV is in Internet streaming, and the Saratoga company makes simple, inexpensive devices that connect TV screens to a growing world of video – from Netflix movies to commentator Glenn Beck’s show – that is stored out in the cloud.

The device is certainly simple and easy to use, and one of many, from game consoles (XBOX to DVD players to connecting a computer directly). Many new TV’s have this functionality built in, as well. But Wood is aiming their product at people like my parents:

“Our customers are not early adopters,” Wood said. “They’re people who watch TV. We put a lot of effort into making it really simple.”

One item that the Roku needs to include is a seamless interface between over the air HDTV and their channels, and integration of a channel guide with times for over the air TV. I don’t know technically how this can be done but it would be great to have a single interface and remote for both types of television.

You can also play games on the Roku, if you have the 2S with the new controller. Here I am starting up Angry Birds, which looked great. They will have simpler type games like Angry Birds, those that a casual user can play, and the remote is WII-like in that the cursor follows the remote as you move your hand. There is a “free” version of Angry Birds and then you can buy extensions, just like you can on your iPad, once you complete the base version. I was thinking about buying Galaga too but didn’t have enough time to play it yet. 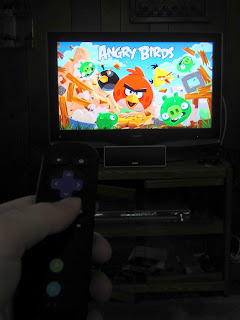 If you are willing to pay a modest amount for Netflix or if you own Amazon Prime and have over the air TV (or someone who has HBO and isn’t using their offline HBO account) you can get pretty much everything except live sports over a device like Roku / XBOX / DVD player / or you computer. Much live sports is available over the air, but there are some events that are only available on dedicated cable.

Cable will have to determine how to fight off these challengers. As cable raises prices, more people, whether strapped by the recession or disgusted with constant rate increases, will consider devices like the ROKU or some other way to get content cheaper. At this point the “bundling” of cable the network and cable the content provider will start to fray. As a network, this is a difficult business to make money as soon as challengers enter the market, given the massive capital needed to build out the network and the multiple years of income streams necessary to pay this off and earn a return for investors.

Content providers, too, are moving into the “cloud” such as You Tube! or just producing directly for the web, like GBTV or other types of artists. Since the costs of straight to the web are so much cheaper than dealing with networks, in the long term this type of service will become a much larger part of the overall ecosystem, in the same way that digital music usurped physical CD’s.

There are new network providers, too. Condominiums are moving to microwave dishes and different connectivity methods than the traditional cable providers. The cable providers won’t come to your building unless they can wire everyone up and push a triple-play package (cable, internet and phone) into every unit. There also are different fixed wireless options coming up for the future, and bandwidth is getting cheaper for major locations that are thoroughly “wired”. The difficulty for the cable companies is that it is much cheaper and easier for them to saturate an existing market that they have wired than to wire up the world – they aren’t the post office. Those saturated customers in the big city or heavily wired suburbs are the ones for which new solutions will be tailored; not the guys in the sticks that are a pain to get to for which there is little competition.

Those expecting ever rising prices for “bundled” cable services including the network component and the content component are likely going to be disappointed. There are many new entrants in this market on the horizon and a general disgust at the established options (at this price point). The future will be disruptive, and Roku is a small part of this equation.

Another element of this is that pulling the technology out of the TV makes it a “dumb box” like your computer monitor. Once you have standard HDMI ports, you can just upgrade your Roku or whatever is driving it and you only need to occasionally replace it when it fails or when a new TV is so compellingly cheap. The dis-aggregation of hardware and software (brains) will slow the growth of this industry, as well. How often do you replace your computer monitor? That will be the type of decision you will make, not buying a TV because of new features or upgrades.

18 thoughts on “Cable and Roku”