Earlier in the summer I asked Dan if he wanted to see the band PELICAN when they came into town for a show. Pelican is a pretty obscure band – they are an all-instrumental band (no vocalist) and they play using major (not minor) chords unlike most metal acts and have few guitar solos. In linking to wikipedia for this post I noted that Pelican might be broken up as of June, 2012, or at least one of their main founders left.

Pelican is the type of band that gets no radio airplay, as in, ZERO. Their music is nowhere in the popular culture. However, they are a great band and I have all their albums and enjoy listening to them, particularly when I work out.

Dan surprised me by saying “Of course I would like to see them, but I can’t make that date.” I was surprised by him wanting to go immediately until I thought, hey, this might be a reason why he is a big Pelican fan too… 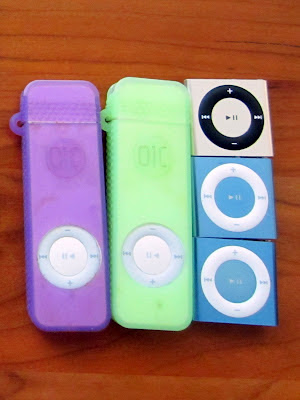 Every so often I “fill up” Dan’s shuffles with new tunes that he uses when he works out. Working out for Dan isn’t what it is for you or me – it probably is an hour long at a pace that would KILL you in the first five minutes. It is also hilarious that Dan has the older generation shuffles, but they still work fine and hold at least 500 MB of songs, which is enough for a workout or trip, and by now they are completely expendable. If you are kind of a shuffle collector too check out the Wikipedia page for the history of the iPod and go down memory lane too (these are a mix of first, second and fourth generation shuffles, the cursed third generation didn’t have the ability to move forward or back without touching a dumb little thing on the headphones and thus sucked).

Thus even though Dan and I don’t live in the same city nor are we around at the same time to listen to music, we like a lot of the same bands, and whether they are (relatively) obscure bands or not, they are in heavy airplay in our respective heads all the time, thanks to the iPod. This isn’t completely new, since people have passed around “mix tapes” since time immemorial, but the atomization of the listening experience is now virtually complete.

If you go to Pandora you can make your own custom playlists – I have Pelican there, too (along with a lot of obscure bands that they link to) and then there are a host of metal and / or hard rock channels on Sirius / XM that play songs that would NEVER get on the radio. There are a lot of great rap / hip-hop stations there too, including some old-school ones that give me a laugh.

On the topic of metal – I saw an interview with Rodrigo Y Gabriela, on the Guitar Center sessions on Direct TV (highly recommended, they also had an awesome one with Social Distortion and now Megadeth doing “Symphony of Destruction”) where this double acoustic guitar band (you need to watch them to understand, also a lot of percussion) said that in every town they have ever been to around the world there is a local metal scene, the only type of music that can make that type of claim.

Radio in Chicago is absolutely miserable – unless I am listening to local sports or perhaps news there is no point turning it on at all – so the choices are Sirius / XM in your car or just hooking up your iPod to your stereo. You can also stream Pandora through your car, as well, if your data plan allows it.

So as mainstream radio completely dies (for rock, at least) it is replaced by a customized format of local and specific choices that are as unique as the listener. Anything you want can be found or acquired. And Pelican fans (along with other obscure bands) can put it on heavy rotation where ever they go. Sometimes as I work out in a big health club I laugh to think about what would happen if they streamed what was on my headphones throughout the club or from the guy next to me who, for all I know, is into music even more obscure.