Travel from the US to Asia has been shortened by use of the “Polar Route“, which means flying over Greenland and the north and then traveling across Russia to Asian countries. It should have been obvious to me that we were taking the polar route since it was a long, direct flight out (to Hong Kong, with connections) but I really didn’t think about it until we started flying north, over Canada. 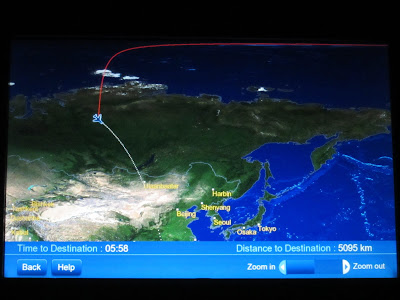 As someone who has spent their entire life studying military history, particularly the Russian fronts, it was fascinating to me that I was actually flying over that country. When you are up over Canada and over Russia and looking at the sparsely populated map on the flight display it does get a little unnerving. When I got back home I looked up the “diversion airports” and there are a few here and there over Canada and then over Russia but it is a long way between them in what would be the dead of winter.

Also interesting is the distorting effect of Greenland on maps as you near the north pole. Greenland is actually about the size of Mexico but of course it seems enormous due to the distorting tendency of common mapping technology.

On the outbound flight we were in a United 747, a four engine aircraft. On the return flight we were in a 777, a two engine aircraft. It is a bit scary to fly over the far north in an aircraft that presumably wouldn’t get far on a single engine. To make matters worse we were waylaid on the tarmac for a few hours before we took off due to “engine troubles”. We made it, but it was a bit hair raising. Per wikipedia there haven’t been any serious incidents with the 777 but our faith in mechanical airplanes is truly amazing.

I also learned to sympathize with flying from the developing nation point of view. The Delhi airport was busy at 2:30am because flights take off in the wee hours of the night in order to arrive in the West at a reasonable hour. It was brutal for me to stay awake that late and it didn’t seem to help my jet lag which I really wasn’t cured of for over a week.

13 thoughts on “India and the Polar Route”