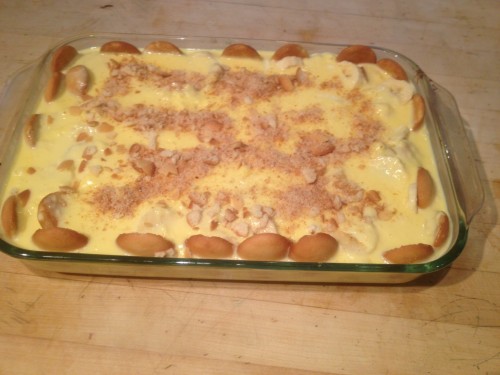 Place a layer of vanilla wafers on the bottom of a rectangular baking pan, using about 40% of the box. Slice 2/3 of the bananas 1/2 inch thick or so evenly on top of the wafers. Put wafers vertically around the perimeter of the pan, as shown, about 20% of the box.

Put the vanilla pudding powder in a mixing bowl. beat in the eggs using an electric beater to a uniform consistency. Pour in the half-and-half and beat the mixture so that it is uniform and not lumpy. Pour in a little bit of regular milk to get it up to six cups.

Pour about half of the pudding evenly over the first layer of wafers and bananas.

Crush the remaining wafers (10%) inside the bag with the heel of your hand, and sprinkle over the top.

Serve as is, or with whipped cream.

The idea here is for the hot pudding to dissolve the crackers into a sort of crust or paste.

The use of half-and-half and eggs is to make the pudding very rich and almost custardy.

This is not a diet dish. Make it as fatty as directed, or don’t bother.

This is a traditional Southern / Black dessert frequently found in soul food or barbecue places.

One of my neighbors has a Super Bowl party, and he usually has ribs or chicken or similar stuff, so I bring this.

My version is the result of trial and error, and it works well.

(This recipe is posted at the request of Dan from Madison.)