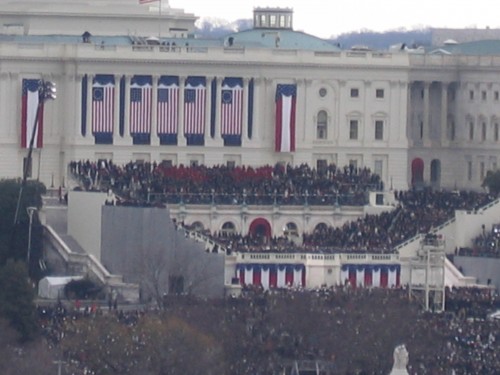 The Preamble is one of the few parts of the Constitution that President Obama did not abuse in his first term. He corrected that omission in his second inaugural address by using “We the People” as a refrain. Democratic politicians love to use refrains in their speeches. At Democratic National Conventions the rabble gleefully and robotically chants the refrain with the speaker. The particular refrain Obama used reminded me of a fascinating talk Professor Richard Epstein gave during a panel discussion at the November 2010 Federalist Society Convention. At the time, I was surprised to hear Professor Epstein characterize “We the People” as the “most dangerous words in the American Constitution.” Now I understand that he explained exactly what Obama was up to:

We have a deep ambiguity in our own minds when we start to evoke the image of “the people” in dealing with American constitutional law or indeed with any system of governance. . . . Sometimes we treat it as a celebration: “The American people have spoken and have decided x, y, and z ought to be president,” and what they really mean is that 54% of the voters happen to agree with one side and only 46 with the other, and what we do is we create a kind of an illusion of collective unanimity by taking a term like “people” and turning a majority into a total number. And in fact our Constitution does that in one place where I think it’s most misleading and most dangerous. I think the single most dangerous words in the American Constitution in one sense are the words “We the People,” which begin the Preamble. Now you would ask, now why is it that I would take such a negative view with respect to our document, particularly on this occasion? . . . You have to go back and see what the original draft of this particular provision was, and it said, “We the undersigned delegates of the following states,” and then you go through the rest of the thing. What it does in effect in one way is to kind of create this image of sort of coercive unanimity, and that’s the kind of language that you see also when you’re talking about the People’s Republic of China or the People’s Republic of East Germany–or closer to home, the People’s Republic of Cambridge, the People’s Republic of Berkeley–in which what you’re looking at is the notion that if you can get a majority, what you can do is to design and to organize the preferences of everybody. So the aggressive application of “the people” in terms of its ability to create and make law is in my mind a real open invitation to totalitarianism.

Well, then you look at the other uses of the word people in the Constitution, and by detailed and sophisticated empirical techniques I was able to identify four such uses in the Constitution, all of which are contained in the Bill of Rights, one of them having to do with the right of assembly, one of them having to do with the various issues on searches and seizures, and one having to do with the Ninth and Tenth Amendments on reverse power. [The Second Amendment has another.] Well, this is what I call the benign use of the term people . . . because what you are doing is you are saying every individual within the society is going to be protected against the impositions of government so that the people can be secure in their homes. We do not mean by that sentence that all of us live in one giant tepee in which we have various separate rooms and they are going to be protected. What we mean is that each of us have private and individual rights and that each and every one of them should be protected against government. So the defensive use of the term people in the Bill of Rights has a completely different resonance and a completely different tone than the rather offensive use, i.e., attacking use, of the term when it starts to go into the Preamble. And this, of course, had real consequences with the design of the original Constitution because every time you start hearing the term people in the Preamble being invoked, it’s to sort of indicate the direct relationship of individuals to the central government, which necessarily is meant to sort of underplay and degrade the role of the states in the original system. So it’s not as though this is simply a rhetorical flourish without institutional consequences. It surely has those kinds of institutional consequences.

As if to illustrate Professor Epstein’s point, Obama uses the phrase “We the People” five times to create an illusion of collective unanimity about (1) redistributionism, (2) the welfare state, (3) climate change (formerly known as global warming), (4) something opaque and equivocal about the war formerly known as the War on Terror, and (5) certain civil rights movements guided by equality “just as it guided all those men and women, sung and unsung, who left footprints along this great Mall.”

Regarding that last one, he probably did not have in mind the men and women, or their predecessors, who would leave footprints along the Mall a few days later in the fortieth March for Life. And in addressing the illusory collective unanimity on the welfare state, Obama used another of his favorite rhetorical devices, the false choice. Those who say we have to choose between having our cake and eating it too are presenting a false choice, Obama argues. We can have our cake, preserving it for our children, and eat it too, he insists. (Actually, he said, “we reject the belief that America must choose between caring for the generation that built this country and investing in the generation that will build its future,” but it’s the same thing).

The inaugural address refers to “collective action” and shows Obama eager to use it to turn the illusory collective unanimity he claims into coercive unanimity. From the perspective of Obama and his infatuates, the Senate, with its advice and consent duty and its tradition of unlimited debate, is a problem to be “fixed,” for it stands in the way of the will of the people. Happily, that effort was checked on both fronts last week.

It was to be expected, I suppose, that a demagogue par excellence would eventually find the Constitution’s “most misleading and most dangerous” phrase and exploit it to lend legitimacy to his program of undermining liberty and the constitutional structure.

8 thoughts on “We the Serfs”