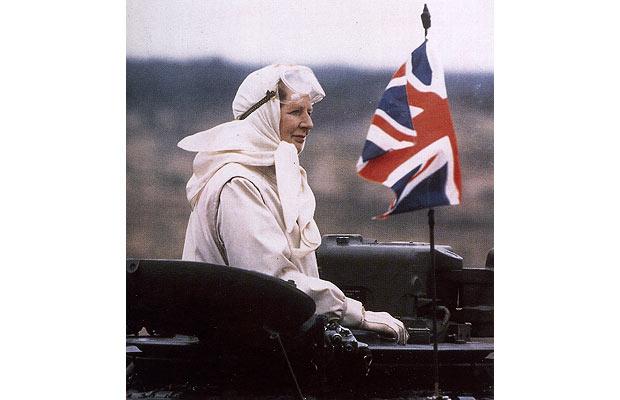 Peggy Noonan had a very nice column about the Reagan funeral. I especially like the passages about Margaret Thatcher.

Walking into a room in the Capitol Wednesday before dusk: A handful of people were standing together and gazing out a huge old white-silled window as the Reagan cortege approached down Pennsylvania Avenue. The sun was strong, like a presence. It bathed the women in glow. One was standing straight, with discipline. Her beige bouffant was brilliant in the sun. I approached, and she turned. It was Margaret Thatcher. It was like walking into a room at FDR’s funeral and seeing Churchill.

The cortege was coming toward the steps. We looked out the window: a perfect tableaux of ceremonial excellence from every branch of the armed forces. Mrs. Thatcher watched. She turned and said to me, “This is the thing, you see, you must stay militarily strong, with an undeniable strength. The importance of this cannot be exaggerated.”

To my son, whose 17th birthday was the next day, she said, “And what do you study?” He tells her he loves history and literature. “Mathematics,” she says. He nods, wondering, I think, if she had heard him correctly. She had. She was giving him advice. “In the world of the future it will be mathematics that we need–the hard, specific knowledge of mathematical formulae, you see.” My son nodded: “Yes, ma’am.” Later I squeezed his arm. “Take notes,” I said. This is history.

Ms. Noonan concluded on this note.

Many great things were said about Reagan, especially the words of Baroness Thatcher, the Iron Lady. What a gallant woman to come from England, frail after a series of strokes, to show her personal respect and love, and to go to California to show it again, standing there with her perfect bearing, in her high heels, for 20 hours straight. I wonder if the British know how we took it, we Americans, that she did that, and that Prince Charles came, and Tony Blair. One is tempted to fall back on cliche–“the special relationship.” But I think a lot of us were thinking: We are one people.

Margaret Thatcher is loved by American Conservatives more than anyone in Britain will ever understand. She is bigger than life, a warrior goddess from the olden times. She and Reagan slew the communist dragon. Sic semper tyrannis.