ZIRP or “Zero Interest Rate Policy” has been in effect in the USA since late 2008. From that point forward, the effective interest received on money from CD’s, banks, and non-risk bearing debt is very low, especially when taxation is taken into consideration. 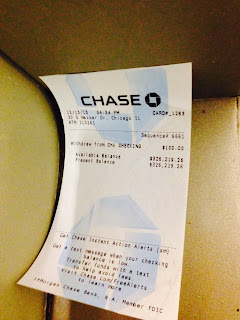 Recently I was standing at an ATM when I saw this receipt casually left on the ground. It showed over $300,000 left in a low or non interest bearing account. To me, this embodies how ZIRP has turned the world on its head.

When I was growing up, inflation was high and interest rates were high, too. I distinctly remember my grandfather having an argument with someone else when he said that interest rates would never go below 10% again (they were nearly 20% at the time). If you had any money, you had to put it to work to get the benefit of “compounding interest” which is basically interest earned on interest, which would make your assets grow quickly. In parallel, of course, inflation was making everything cost more, so you were probably treading water, but that is a different issue entirely.

In the age of ZIRP, there is no point instructing anyone about the advantages of compounding interest, because the effects are too small to be believed. In the portfolios I run for my nieces and nephews, they receive ZERO CENTS most months on the cash held in their account, and the cumulative year end totals are too small to receive an interest 1099 from the IRS. The SEC fee, which amounts to a few pennies per trade, actually is a larger cost, so I am just likely to ignore both elements.

Today you can tell people that with this interest rate policy, it really doesn’t matter where you keep your spare cash, in terms of lost opportunities to earn interest. This is the money that you need to have on hand in case markets seize up or you have an emergency, not money that you are investing and can wait a bit for the market to thaw out. You may as well leave it in a checking account, like this person does, because he is giving up such a nominal amount of money every year (less than half a percent, which is probably about $1500 before taxes) which probably is noise to him or her.

The banks barely even want your deposits. Theoretically they should be able to turn these deposits around into loans where they would make a solid return of several percentage points and thus they should be happy to receive your money by paying you just a little more than the next guy. But apparently banks don’t care about making loans or they think the risks are much higher than the interest rates businesses are willing to pay them.

Over $300,000 sitting in your checking account and you don’t even care, and the banks don’t care to compete to get those deposits, that’s ZIRP embodied in a simple graphic.