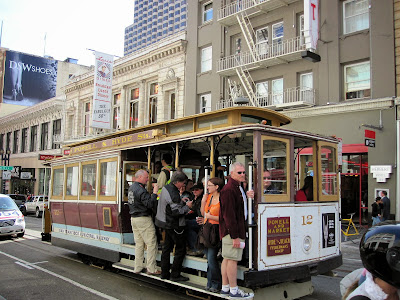 In San Francisco recently there has been a minor hubub about the buses that ferry technology workers from San Francisco (where they live) to Silicon Valley (where they work). “Activists” have been blocking the city bus lanes where the technology companies pick up workers, and the city of San Francisco recently voted to charge the buses $1 for each time they stop in the bus lanes to pick up passengers, per this article. However, the “real” challenge isn’t with the buses, but the impact of Google, Facebook and other technology companies in the valley that are contributing to a rapid gentrification of the entire city

But while logistical details of the pilot program were the reason for having the hearing, they also had nothing to do with it. For many residents, the high-ceilinged room at City Hall was a forum for airing much bigger grievances about inequality, for articulating angst against an industry attracting bands of well-paid workers to town while long-term residents are losing their homes. “These companies are filthy rich,” said a resident born in San Francisco. “We need to squeeze them for everything they’re worth.” Some speakers wanted the buses to be banned and for companies to take the money spent on shuttles and funnel it into the city’s transportation budget — advice the committee approving the proposal didn’t find too compelling.

A similar difference in approach played out at the protest that morning. While some activists made careful arguments about the tornado of wealth, growth and housing shortages that has thrown the city into an affordability crisis, others held a giant sign with a much less nuanced message: “F*** off Google.”

This thread crystalizes two key threads that I’ve noticed in my visits to California for work and for pleasure (Dan and I have been there a couple of times to run the Presidio 10) and I often travel to the valley to visit various companies as part of my job. The first item is that San Francisco has been completely remade, from top to bottom, and there are almost no “bad” neighborhoods left in the entire city. I’ve walked through most of the city or taken the streetcars, or driven, and since the 2008 bust the entire city has been part of an enormous revitalization as wealthy tech workers and related professionals have bought up property in the city. There still are a bunch of drunks in the Tenderloin, aggressive panhandlers everywhere, and some projects and worse neighborhoods in the corners of the city, but by and large it has been completely upgraded.

The second thread is that the workers in Silicon Valley are so completely opposite of these “activists” that it is difficult to know how to begin the comparison. At all of the companies I’ve visited the professionals are engaged in their work and have a very “capitalistic” view of being the best and beating the competition. While California is a completely “blue” state on the map, these technology professionals couldn’t be more “red” on the issues of free markets, access to capital, and the nature of the world-wide competition that they face (I don’t know about social issues because we’d never discuss that sort of thing). These firms leverage overseas workers without a second thought, and ruthlessly prune inefficient parts of their organization to focus on their core differentiators.

While the world was focused elsewhere San Francisco transformed into a post-industrial city full of aggressive technology workers and professionals. Due to some remaining elements of rent control there are still some of the characteristic “activists” milling around but the relentless and unstoppable force of high property values will find solutions and will eventually demolish and buy out their remaining haunts until it is just the ruthless face of the post industrial economy that can afford to live in the city.

The “activists” will end up packing their belongings and heading over to Oakland or somewhere else where the rents are affordable and they can pick up their protests there. Unfortunately for them San Francisco’s compact size, beauty, and absence of large scale government subsidized housing will drive them completely out of the city. The college students will likely pick up some of the protests but since they don’t really vote or build a substantial power base up the wealthy firms will soon control local government and then policy and reality will align.

If you really want to look at long term opportunities I’d recommend property in Oakland. Oakland has a great location, it just needs to be terraformed via gentrification and rising property taxes until every activist and poor person is driven out, just like it is occurring today in San Francisco. Maybe this is a 20-30 year vision, but it will happen.