At the Gene Siskel Film Center in Chicago they have a lot of great films. In addition to interesting and artistic films, I also enjoy the fact that they have very few previews and no commercials as well as the fact that you can buy a beer while you are watching a movie. 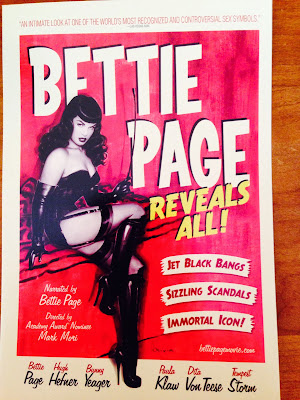 Bettie Page Reveals All is a documentary about the iconic fashion / fetish model Bettie Page. For me, the most interesting facet of the movie was not discussed at all; what would have happened had Bettie Page been a modern celebrity instead of one who retired from public life in the late 1950s.

When Bettie Page stopped doing photo shoots, she simply fell off the face of the earth. In those days it was easy to hide; records weren’t online, the web doesn’t provide a central place for people to (inadvertently) pool information, and it doesn’t take an instant to upload a stalker photo to twitter. She never provided any other photos after her shoots, so that’s how the world knows her today. As George said in Seinfeld, she “left on a high note”.

Bettie Page, however, had actual skills and intelligence. In the documentary they showed her high school transcript and she barely missed being the valedictorian of her high school class which would have given her a college scholarship. Unlike modern “celebrities” who became famous solely due to a “s*x tape”, Bettie Page designed and sewed many of her own costumes. She also had a lot of personality and took control of the photo shoots and could (sort of) act. Compared to 99% of the “celebrities” today, she had talent.

Alas, like many of the modern celebrities we wouldn’t name her because we don’t want the traffic, she was bi-polar and ended up spending several years in a mental institution after she stabbed her landlord in a psychotic episode. In the end her story had a semi-happy ending because Hugh Hefner found her a lawyer who got her royalties for all the various things being made with her iconic image on it so that she at least had some money in her retirement years.

6 thoughts on “In Another Era, She’d Be a Gigantic Star”