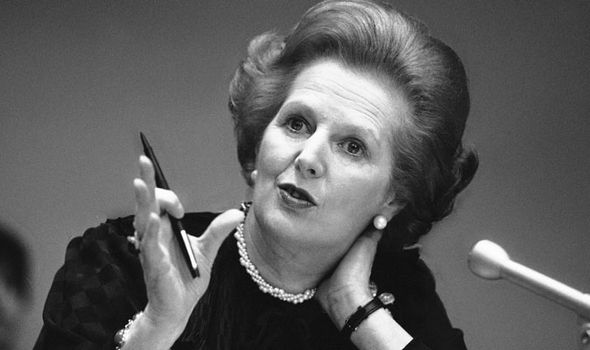 [A]s some smart-aleck said, we must change or perish. And who should break our long postwar consensual slumber — not with a snog but with a short sharp smack around the head with a handbag and a cry of “Look smart!” — but the Iron Lady herself.

Mrs Thatcher meant, and still means, many things — some of which she is not yet aware of herself, as we are not. Only death brings proper perspective to the triumphs and failures of a political career; it is only with the blank look and full stop of death that that old truism “all political careers end in failure” stops being true. Only a terminally smug liberal would still write her off as an uptight bundle of Little Englandisms, seeking to preserve the old order, however hard she worked that look at first; voting for her was something akin to buying what one thought was a Vera Lynn record, getting it home and finding a Sex Pistols single inside.

She was just as much about revolution as reaction, and part of any revolution is destruction. Some of the things she destroyed seemed like a shame at the time, such as the old industries — though on balance, isn’t there anything good about the fact that thousands of young men who once simply because of who their fathers were would have been condemned to a life spent underground in the darkness, and an early death coughing up bits of lung, now won’t be?

Here is the original article. RTWT.

Let’s hear that one more time:

“She was just as much about revolution as reaction, and part of any revolution is destruction.”

The old Tories hated Thatcher exactly the same way the old guard GOP hate the Tea Party, which has evolved into a much bigger and broader reform movement within the GOP.

The old GOP is embedded in the existing framework. It is a structural feature of the old order. It is part of what we call America 2.0, which is now a fading crony capitalist regime, the toxic remnant of a once-great industrial era America.

The Tea Party, the reform movement, would not use this expression, but they are clearing the rubble so we can build America 3.0.

Thatcher only partly succeeded in changing her party, and her country. She was a generation early, perhaps.

The opposition in our country, in our times, by the old GOP, will be even more hostile and intense than what Mrs. Thatcher faced.

It has to be this way.

The old order does not go away easily.

There is no alternative.

(I quoted this article in a post back in 2005. I then said of Julie Burchill: “There is nothing remotely like her mix of sentimental Bolshevism, working class cultural nostalgia, British patriotism and militarism, Judaeophilia, loathing of Germany and (usually) America, detestation of the British upper classes, personal libertinism combined with a hardnosed understanding of the consequences of such behavior, and her devotion to sixties-era British hipness and seventies punk rock. She is often wildly wrong, but always entertaining.” This recent piece by her from the Spectator, The only trouble with Tel Aviv – flying there doesn’t feel scary any more, is good.)