Every weekend I read Barry Ritholtz’s recommended reading and there are a lot of gems in there. Recently he posted this Credit Suisse graphic about markets at the turn of the 20th Century by market share and compared it with 2014 on the topic of global equity investing. 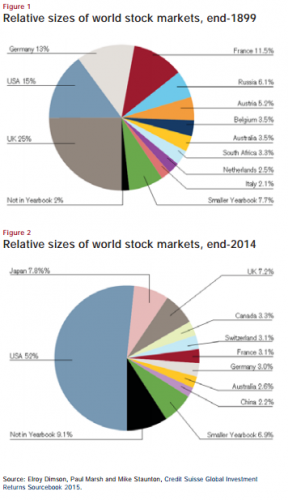 In his article he mentioned the fallacy one might fall into as a UK equity investor in 1899… why bother investing in the USA when the UK market is so much larger? And then this line of thought ends up missing the huge growth in US market share over the next century.

However, the real issue here isn’t the relative change in market share by the different countries; it is the fact that almost all of these markets were entirely extinguished at one time or another by political, economic or military events that wiped out the investors.

The implicit “long run” theory of investing can be pithily summarized as “leave in your money indefinitely, keep investing, and it will all work out for you”. Sure, the USA had a near-death experience in the 1920s-1930s with the Great Depression, but if you would have been able to hang in there, long term gains would have more than made up for any of those losses!

But this model doesn’t work out if you are completely liquidated by a discontinuous event somewhere along the line. There is no ability to recover from lows if your equity basis is driven down to zero. The only way to survive in this sort of long term model is to pull out entirely from markets at some point, put your capital in a different market, and return to that market when those calamitous events have passed. This is at complete odds with the “long run” model that I vastly simplified in the previous paragraph.

It is completely obvious but that German market share from 1899 to 2014 didn’t “drop” from 13% to 3%… that is a statistical artifact because all of the German equity investors were wiped out by war and then a new class of equity investors came to take their place under the “German” name. The pre- and post-war markets shared nothing in common from a continuous-investor perspective, especially if you were a US resident attempting to invest in Germany. All of these markets with the exception of the US, UK and parts of the British empire (Canada, Australia, South Africa) had “liquidation” events that took out all the investors and in 1940 before the US entered WW2 even the Commonwealth had a near-death experience.

There is no “long run” model as I described above for ANY significant market with statistics except the US and UK yet this fact is rarely mentioned alongside the statistics. The only way to be a global investor with a mega-long horizon (decades) is to try to get in and out of these markets before “wipe out” events occur, of which there are many, including:

– Currency Events – Greece is essentially going to wipe out their equity markets (it already has mostly happened) if they leave the Euro, and there will be a new group of investors that would take the place of those that were liquidated
– Military Events – at some point US investors likely will be pushed entirely out of Russian markets if our military escalation continues, and this will be linked with currency market changes as well as commodity market changes and nationalizations
– Commodity Market / Nationalizations – in Latin America today we see nationalization of assets which can be closely linked with commodity price movements (oil price drops) as well as distortions of their currency markets

To use a bad sports analogy, it is as if we base all of our predictions and records on the NY Yankees and don’t talk about all those teams that started, folded, and moved since the 1927 Yankees fielded arguably the most dominant team of all time relative to competition. We don’t talk about the Montreal Expos, the Brooklyn Dodgers, and the Washington Senators, etc… and we can learn just as much, if not more, by looking at the dead-ends and how they ended up failing as we can by following the most successful teams and thus celebrating their great fortune as the de-facto norm.

11 thoughts on “The Liquidation of Markets”