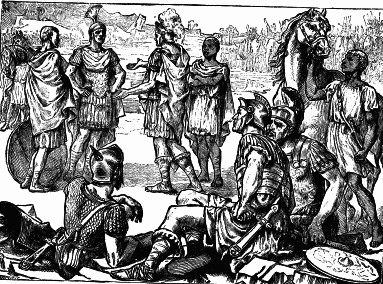 10. It is said that at one of their meetings in the gymnasium Scipio and Hannibal had a conversation on the subject of generalship, in the presence of a number of bystanders, and that Scipio asked Hannibal whom he considered the greatest general, to which the latter replied, “Alexander of Macedonia.”

To this Scipio assented since he also yielded the first place to Alexander. Then he asked Hannibal whom he placed next, and he replied, “Pyrrhus of Epirus,” because he considered boldness the first qualification of a general; “for it would not be possible,” he said, “to find two kings more enterprising than these.”

Scipio was rather nettled by this, but nevertheless he asked Hannibal to whom he would give the third place, expecting that at least the third would be assigned to him; but Hannibal replied, “To myself; for when I was a young man I conquered Spain and crossed the Alps with an army, the first after Hercules. I invaded Italy and struck terror into all of you, laid waste 400 of your towns, and often put your city in extreme peril, all this time receiving neither money nor reinforcements from Carthage.”

As Scipio saw that he was likely to prolong his self-laudation he said, laughing, “Where would you place yourself, Hannibal, if you had not been defeated by me?” Hannibal, now perceiving his jealousy, buysoma replied, “In that case I should have put myself before Alexander.” Thus Hannibal continued his self-laudation, but flattered Scipio in a delicate manner by suggesting that he had conquered one who was the superior of Alexander.

Lee’s case has merit. If Lee’s memory was as accurate as it was convenient, Lee was one of the most significant figures of the twenty first century. Deng Syauping took his foot off the throats of one fifth of humanity, letting them rise from absolute poverty to genteel poverty. For that, Deng is one of the most adequate leaders of the twentieth century. If Lee helped Deng rise to adequacy, he deserves an adequate share of significance.

Whether history gives Lee as hearty a high-five as Lee (through Deng) gave Lee depends on whether Lee’s great authoritarianism continues to be great authoritarianism without its great authoritarian. Cárdenas’ “perfect dictatorship” endured 54 years. Joseph Steel’s dead cat bounce reached 1991. Mau’s dead cat bounce carried a Deng, a Jyang, a Hu, and now a Syi. And those cabals had some component of rotation of elites built in. Lee’s die is cast with old school hereditary monarchy. His dynastic successor has an heir and two spares (three spares if Singapore doesn’t follow Salic Law). Time alone will tell if Lee Kuan Yew wins the genetic lottery now that he’s no longer around to play retired emperor.

9 thoughts on “For whom the bell Dengs, it Dengs for Lee”